Lorain Reese with his grandson Alex 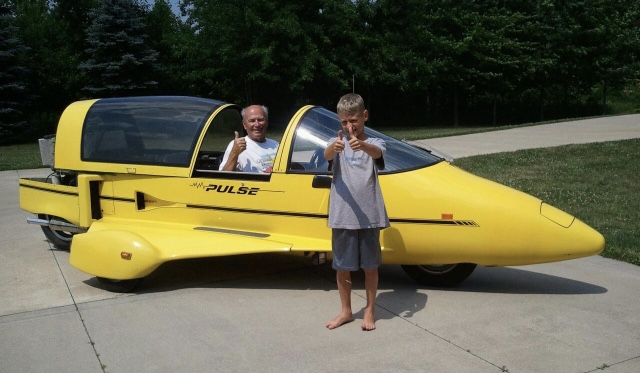 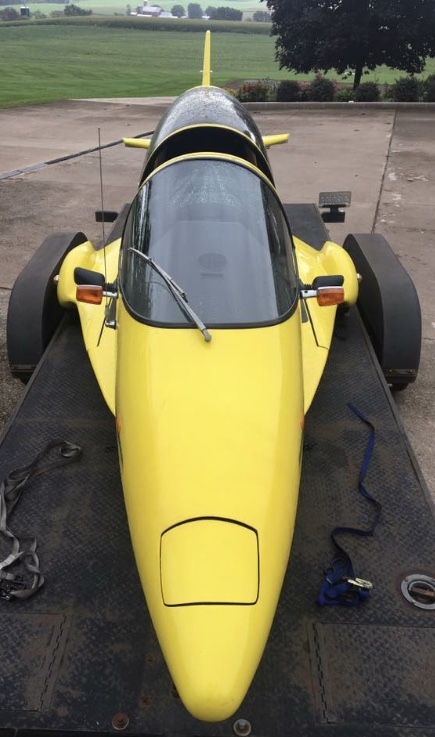 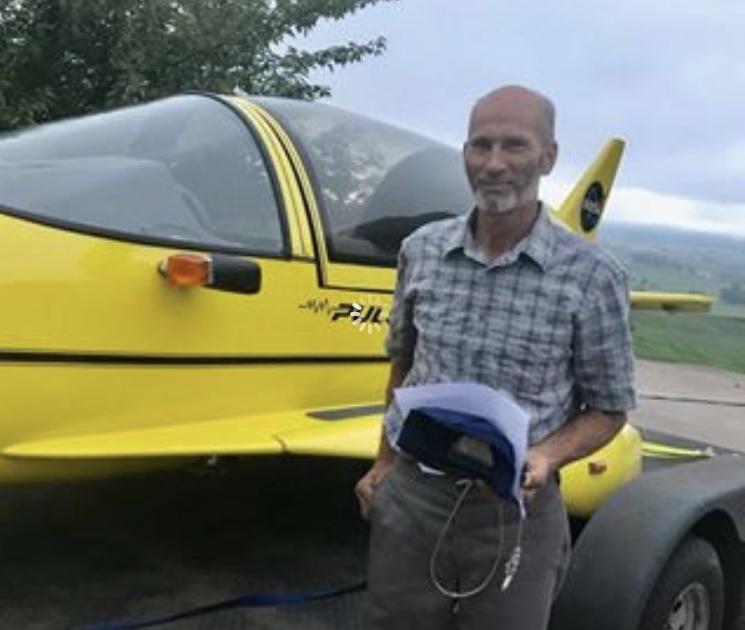 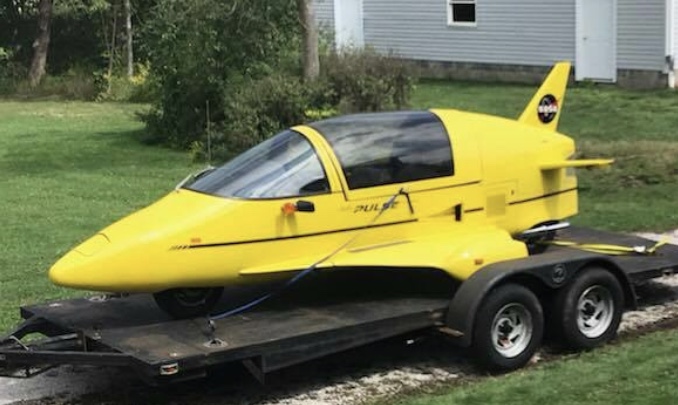 Rich was operating this Pulse when a woman ran a red light and he T-boned her car. He was legally doing 50mph and recieved minor injuries.

He was wearing a helmet at the time.

In early 2020, it was involved in an accident. Luckily, no one was injured. 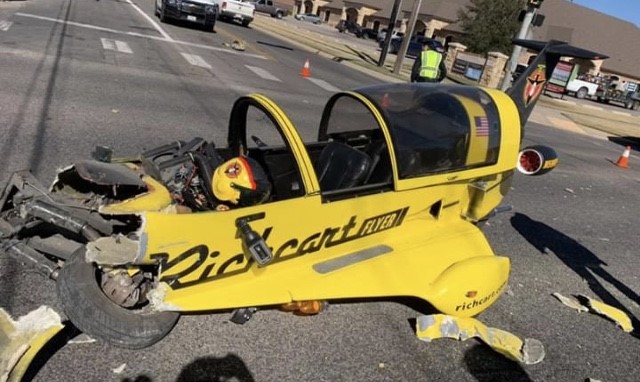 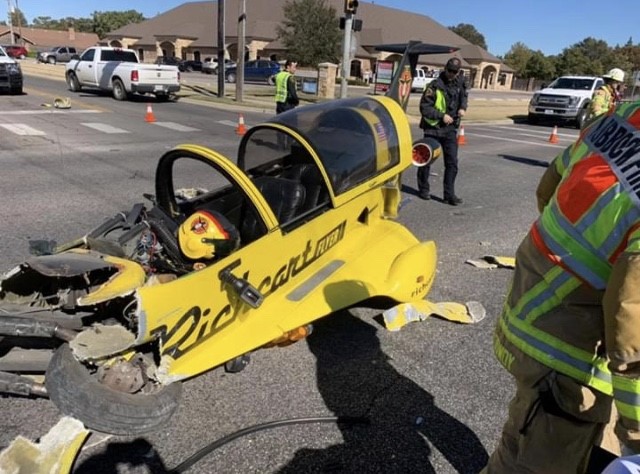 Pete Hatfield of Muscatine, Iowa was a Honda motorcycle dealer and he purchased this Pulse from the original owner. It has the Fiero type pop-up headlight and a 1983 Honda Gold Wing 1100cc 4 cylinder water cooled engine. 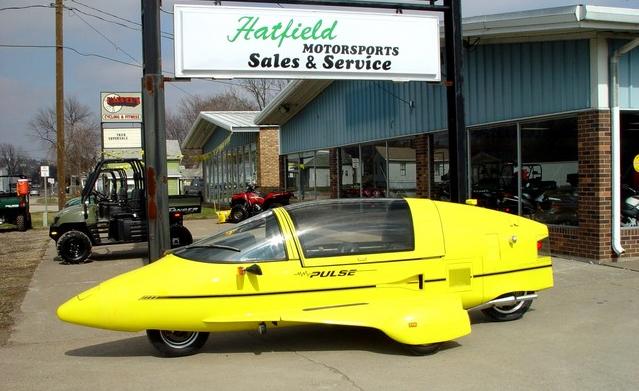 It has 5 speeds plus reverse, heater, windshield wiper and fresh air vents.

Pete drove this Pulse with his wife as passenger to both the 2009 and 2010 National Pulse Rallys in Marion, Indiana. That is about 900 miles round trip counting miles driven while at the event.

This Pulse has always been garage stored and the first owner let the Pulse sit for 7 years prior to Pete buying it,

Here is a partial list of Pete's restoration in about 2008:

3. Replaced all dash wiring and electrical gauge wiring and installed an all new digital dash custom built by Dakota Digital. The rewiring is all done with soldered and heat shrink connections. No scotch locks, twist connectors or tape only connections. The digital dash include digital readouts for speed, rpm, water temp, volts, fuel supply, odometer, oil pressure, front shocks air pressure and rear shocks air pressure. The gauges are user adjustable for upper and lower limits. Pete programmed the speedometer (airspeed) to a GPS while driving, it is dead on. Nearly $2,000 invested in this dash system alone. 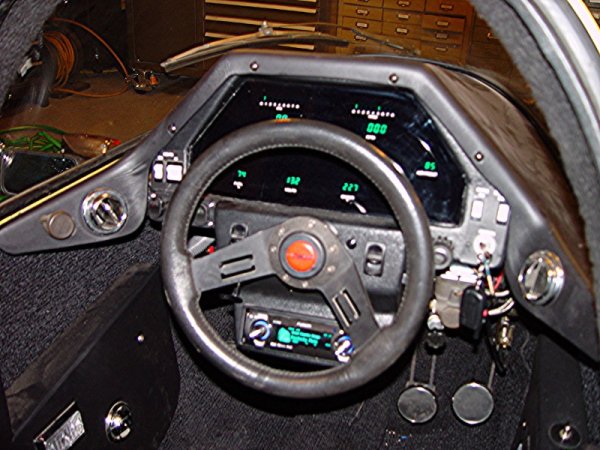 4. There is an onboard air compressor with separate dash mounted switches for front and rear air pressure. There are new Autozone air shocks front and rear. The air system does not leak and stays where you put it till you change which is easily done on the fly. The switches are located right and left of the steering wheel just below the digital dash.

5. The stereo system has been completely replaced. There is a rare Fusion digital display radio that has a removable faceplate with a built in Ipod dock. It can hold most any model of Ipod. It currently houses a 16GB Ipod Nano that has close to 2,000 songs, but would probably hold twice that many. It probably has 750 Elvis songs on it. There are 4 Sony Explode speakers to deliver the sound, believe me, more than enough. Close to $1,000 invested in the sound system.

6. The windshield and canopy are original and are in excellent condition.

7. There is a new Zirgo radiator fan controlled by a Dakota Digital fan controller system. The fan cut-on and cut-off temps are customizable and user adjustable. It can even be programmed to run for set time period after ignition shut off. The fan is extremely quiet but there is an orange indicator light on the dash the lights any time the fan powers up.

8. There is a keychain remote that senses air pressures in all 4 of the tires. The air pressures on a Pulse can be difficult to check because everything is so covered. There is an electronic sensor on the valve stem at each wheel. Just press the button on the keychain remote and it displays air pressure at each tire. The remote can also be programmed to beep and/or vibrate with designated low or high pressure amounts. Works great and is accurate. About a $400 item.

9. There is a new custom built, stainless steel fuel tank with new sending unit and race car style gas cap. This tank is as big as it can be and still fit in there. It holds close to 12 gallon which is a huge range. On our trips to the rally, we consistently got between 55 and 60 miles per gallon. It runs fine on regular, premium or even ethanol. 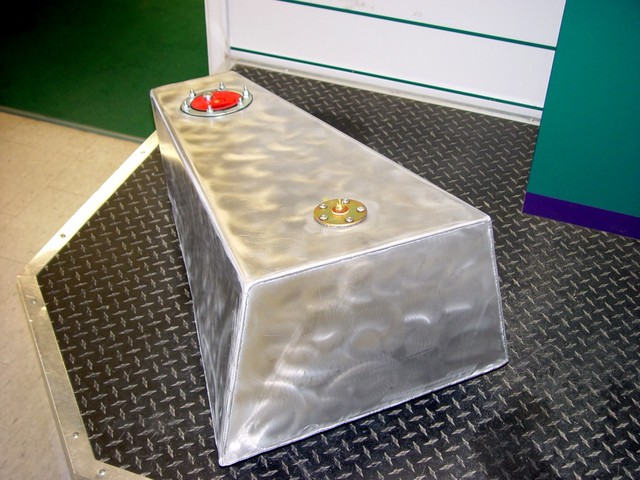 11. The interior has been completely redone in about 2009. The seats have been rebuilt with black ultra-suede leather in a tufted pattern. The carpeting on the floor, side and inner canopy is black, low pile designed for rugged use with great looks. The side panels have been built new and are carpeted and leather covered to match the seats. The dash cover has also been covered in the same material as the seats.

12. An auxiliary fuse block and a central grounding block were installed during the dash conversion and are installed under the dash hood.

13. The choke cable is a custom made vernier dial type cable which allows applying and releasing the engine choke merely by twisting the dial instead of applying undo pressure to the dash by pulling the stiff choke. The throttle cable is also a custom made cable that now uses a bearing pivot on the foot end rather than just screw clamping the cable thus eliminating common cable breakage.

14. A few other nice touches include a bright green neutral gear indicator light located just between the shifter handle and the reverse power switch. There is a 12 volt power outlet and a storage pouch on the back of the driver's seat. There are four lighted rocker switches for the outrigger running lights, the interior lights, a manual override for the cooling fan and one empty switch for future use. There is a port on the left rear with a hinged weather cover that is wired to the battery and is used to plug a battery maintainer into for long term storage.

15. While at the 2009 Pulse Rally, the Hatfields were interviewed with our Pulse by Ray Johnson as they were interested in our travels in the Pulse. That year were were the second longest distance attendee that actually drove a Pulse to the event.