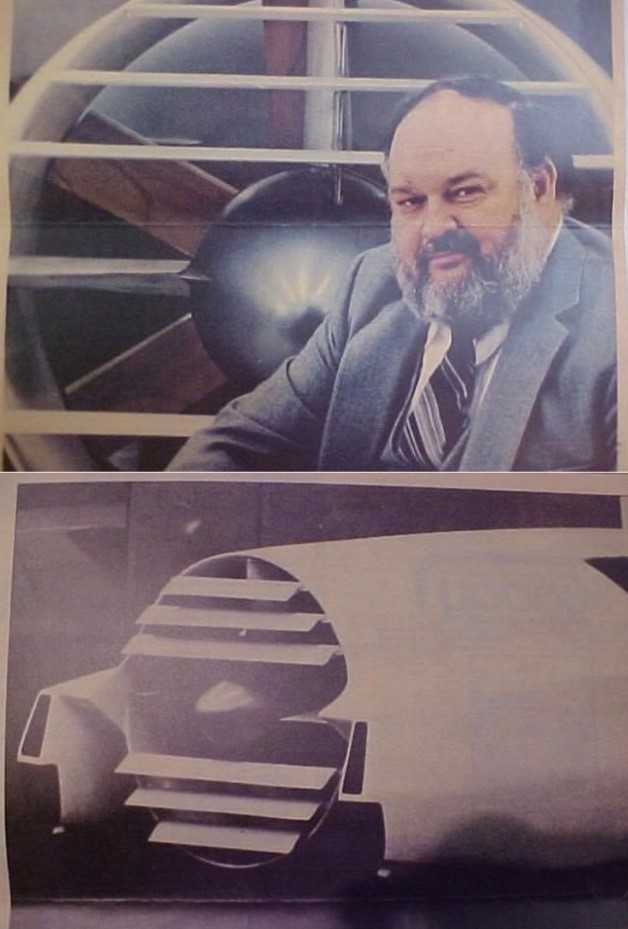 Exerpts taken from an article from the Columbus Dispatch Magazine .... 3-29-81

James R. Bede, 47 of Cleveland, Ohio says that if everyone drives his Bede car, the United States can become an oil-exporting nation. He bases his statement on the car's performance tests at the Transportation Research Center near Marysville, Ohio.

The prototype car, three years in the making and as yet unnamed, got 117 miles per gallon during a 200-mile test at TRC in November. Bede said it will do even better. "The car is designed for 120 miles on the gallon of gasoline at driving speeds of 55 miles an hour. There's no gimmick, no special little pills that we put into the gasoline tank. The difference is all in the design of the car." 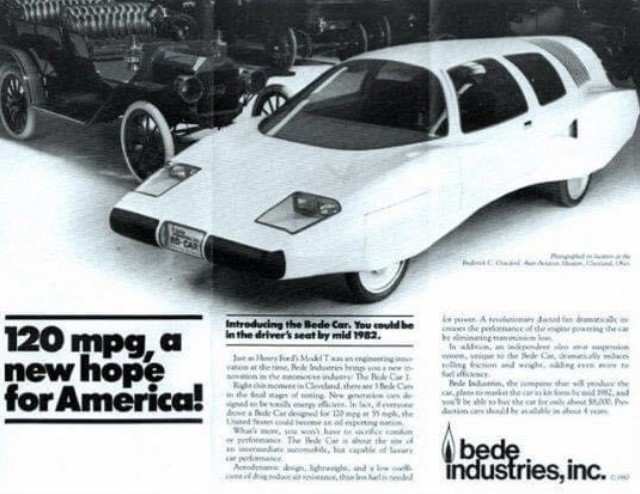 The inventor agreed the car looks an awful lot like the batmobile without tailfins. He credits its superhero performance to the car's aerodynamic design, light weight and low measure of drag, which he said greatly reduces air resistance, requiring less fuel for power. The primary propulsion is provided by a six-bladed ducted fan which pushes the car down the road.

Adaped from aircraft-propeller technology, the fan is housed in the car's rear end and driven by a four-cylinder, 75 horsepower engine. A small electric back-up motor, powered by four automobile batteries, enable the car to drive in reverse and can assist in acceleration. (The batteries are recharged by the engine.) The system can propel the lightweight aluminum, fiberglass and plastic body from zero to 60 mph in 12.5 seconds, Bede claims. The car weighs 980 pounds. You can push it with one hand.

Because of its design, the car hugs the road and is not affected by passing trucks. It has an innovative underside, completely covered and no wheelwells, to cut down on drag. Panels open on side of the car when it turns, to give the wheels room. They are connected to the steering mechanism. In addition, Bede said, the car has a suspension system that "dramatically reduces rolling friction." It's lighter than the suspension system on other cars.

A graduate of Wichita State University in aeronautical engineering, Bede began his career with North American Aviation in Columbus, working on the F4J jetfighter. Later, his Bede 5 jet design inspired the development of the government's Cruise Missile.

Bede's automobile is to be available to do-it-yourselfers in kit form by mid-1982 at a cost of $8,000. The buyer doesn't have to be a trained mechanic to put it together, but should be handy with tools, the designer said. Production cars will be available in three to four years, assembled in a Cleveland-area factory. They will cost more. 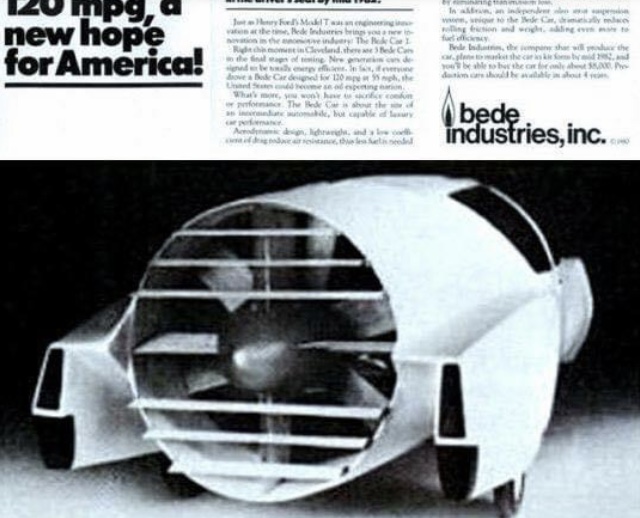 BEDE INDUSTRIES The automobiles are to be manufacturered by Bede Automotive Co., a subsidary of Bede Industries Inc, of Cleveland, Ohio. James D. Bede, 40, Bede Industries president and a cousin of the car inventor, said it will take $5 million to bring out the kit car. He estimated it will take $120 million to set up a factory to turn out the production cars. "We're exploring the possiblity of companies like Sears and K-Mart handling the kit cars," the Bede offical said.

Bede Industries, born out of the energy crunch that hit the world in 1973, was started four years ago with a $35,000 investment that has been parlayed into a $5-million-a-year business. The firm's plant on the far west side of Cleveland produces low-cost, energy-saving products for the home, such as a device for recycling heat generated by a gas or electric clothes dryer. It sells for about $7 and was invented by James D. Bede, the company president.

The Bede car is about the size of an intermediate automobile, 17 1/2 feet long. It has a 114-inch wheel base and is 69 inches wide and 54 inches high. It can comfortably carry four people. The luggage compartment is under the front hood. 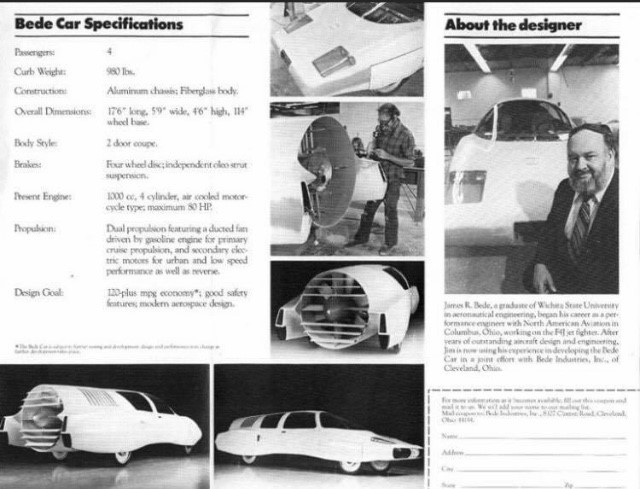 The frame in Bede's car is made of an alloy of aircraft aluminum filled with polyurethane foam. The foam hardens inside the frame. Bede said it will absorb more of an impact than a frame made of steel.

The car's body doesn't have any steel in it, either. Fiberglass and polyuretyhane plastic will make it lightweight and rustproof. The disadvantage of fiberglass is it crickles in a crash. A blow on one fender can send ripples of damage through the whole body. Bede said that areas of the car subject to dents, the front and rear, doors and fenders, will be made of polyurethane plastic, which will not dent under a light blow. It will survive even relative heavy blows by springing back to its original form, he claimed. The hood, top and underside will be of fiberglass, which is firmer than polyurethane and will give the car more stability.

The prototype has disc brakes and aircraft-type oleo (oil shock-absorbing) strut suspension. The car tested at TRC had a four-cylinder air-cooled engine. Bede said the car also will be available with smaller engines, two and three cylinders.

"Engineeringwise," he said, "the car meets and surpasses all government requirements, EPA and Department of Transportation. The actual tests will be carried out with the early cars manufactured. We have no doubts they'll more than pass."

The Bedes plan to manufacture two different models of their high-mileage automobile, one fan-driven like the prototype, and the other with direct drive. The direct-drive model will have a rear engine with direct drive to the back wheels. 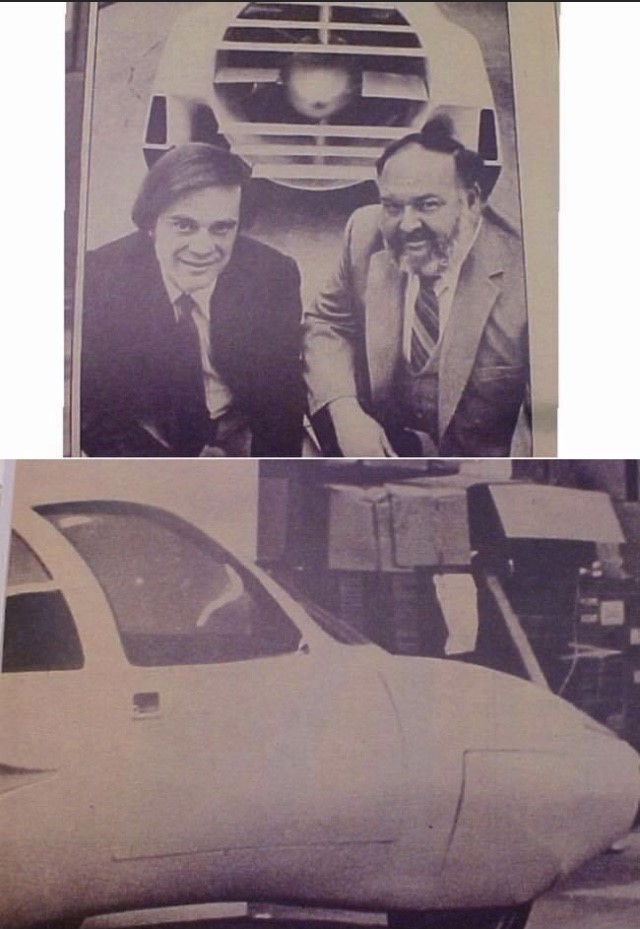 "The direct-drive car will be just as efficent as the fan-driven car, especially at speeds under 70," the designer explaned. "In open country and at high speeds, the fan-driven model will be more efficent."

Why hasn't Detroit come out with a lightweight intermediate-sized automobile like the Bede Fan car?

"Detroit is geared to steel," an industry spokesman explained. "Stamping and assembly, the whole system, is set up for steel. One auto maker even has a steel mill. It would be extremely expensive to switch suddenly to other materials."

But somewhere down the road it will come. There will be more use of fiberglass and plastics to help make the cars more fuel efficient and yet maintain their structural capabilities.

Analysts who have studied the Bede car think the fan-driven car has a good chance to succeed, especially as a commuter vehicle in open or rural aeras. But it may pose problems in cities, some critics claim. Pedestrians and other drivers just behind it may object to the blast of wind from its fan. It's stronger than the rush of air from a large house fan but not as bad as a blustery day, in downtown Columbus. However, the Bedes point out, if people really object to the fan, there will be the direct drive model, which will be the first kit car sold.

The new car isn't Bede's first invention. He headed a company that produced single-passenger propeller and jet airplane kits in the 1970s. Bede made and sold more than 3,000 of them. But eventually the company went out of business, because, he said, he didn't have time to "properly manage it."

This time Bede hopes to do better, because cousin Jim, who heads the very successful Bede Industries, will be looking after business matters. 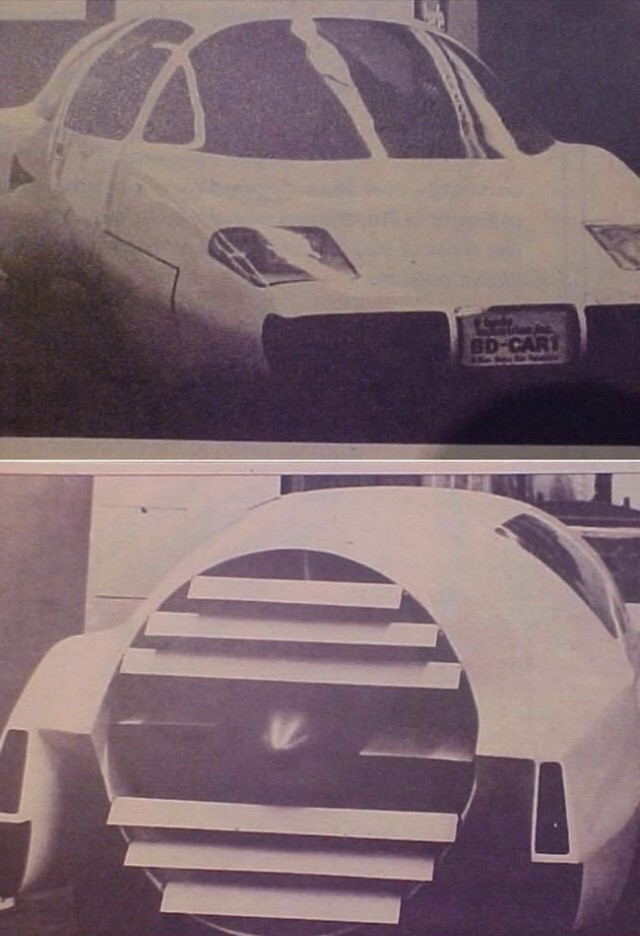 Editor's note:
It is believed that the Bede Fan Car burned up in a garage fire. Anyone know more about the Fan Car?

In late 1980, I was a 23 year old motorcycle mechanic at a large dealership near Cleveland, Ohio. I wasn't really looking for another job, but one day two different people showed me the same help wanted ad. The ad was looking for someone to help build a special high mileage vehicle based on a motorcycle.

I was known around the shop as sort of a "mad inventor" because I liked to build things. I called the phone number and showed up for the interview at Bede Industries in Cleveland.

I remembered Jim Bede from a second grade field trip to a local airport where he was working on the BD2 project.

Today, he was working out of his cousin's business, James D. Bede, where he just completed a ducted fan powered four wheel car. The idea was a 120 MPG automobile that would revolutionize the automobile industry. 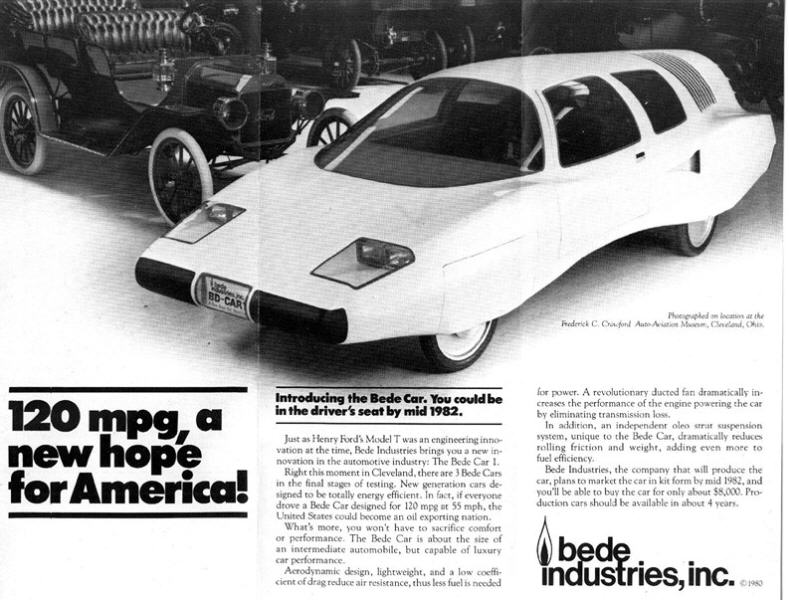 Mr. Bede had previously designed aircraft and even a small house fan for his cousin and a little device that whistled when your furnace filter was clogged. The house fan was remarkabley quiet and efficient. Possibly his most successful design, but it never made production. His cousin's company sold energy saving devices.

Jim had arranged to borrow some shop space and was looking for part time help to do fiberglass work on his personal projects. He seemed happy to find a motorcycle mechanic and I explained that I modified my road racing motorcycle to include a rising rate linkage suspension, front anti dive brakes and rear brakes that forced the bike to squat for better weight transfer. I also mentioned I just finished a fiberglass body dune buggy.

I got the job and immediately started working part time in the evenings for a few weeks.

The BedeFan Car automobile was frequently demonstrated for investors. However, it was hard to start and didn't run perfectly, so I installed different carburetors and made a custom ignition advance unit to smooth out the idle and low speed performance.

It used a sawed off motorcycle engine with no transmission and a fixed advance ignition for aircraft use. I had to make an advance unit that ran backwards because they moved the ignition to the other side.

As I remember it, the car looked sexy, but was very impractical. It had very little static thrust so it couldn't climb a driveway, it would even get stuck if a small stone got in front of the tires. Of course it kicked up debris because you had to really gas it to get rolling. The chassis was weak and flexible with over half the weight of the vehicle on one skinny overloaded motorcycle wheel.

I think Jim's cousin put up the money and provided the space at his company in Cleveland.

The summer of 1981, Jim went to Africa for some kind of BD-4 business and left me with a half-baked design idea to build a simple running car chassis for third world countries. This project was for a friend of his and had to be finished in a month, another pressure job.

With no one to answer questions, I was told to just "wing it'. I had a nice workshop behind my parents house and worked hard once again to keep one of Jim's promises. The result was a running chassis for a car called the "Village Vehicle". It used a two cylinder 18 HP air cooled engine and a snowmobile torque converter. It barely resembled Jim's design, but the customer loved it.

Jim trailered the chassis to Washington DC and I followed him in the BD-200 Autocycle. I promised to drive normal this time! I was always amazed at how many people have cameras in their cars, so I brought one just to take pictures of them gawking at me.

While we were there, I followed Jim to the Department of Transportation offices where he hoped to convince at least one D.O.T. employee that this was actually a three wheel vehicle.

Always on the lookout for investors, we drove out of town to meet a member of the Dupont family at a small gas station for a demo ride in the BD 200. Apparently he forgot his checkbook!

At least I got to see the Smithsonian. I'll admit to feeling a little awed standing next to Jim Bede and looking at the first BD-5 prototype hanging from the ceiling. He later talked about donating the Autocycle prototype in order to take some huge R&D deduction on his taxes.