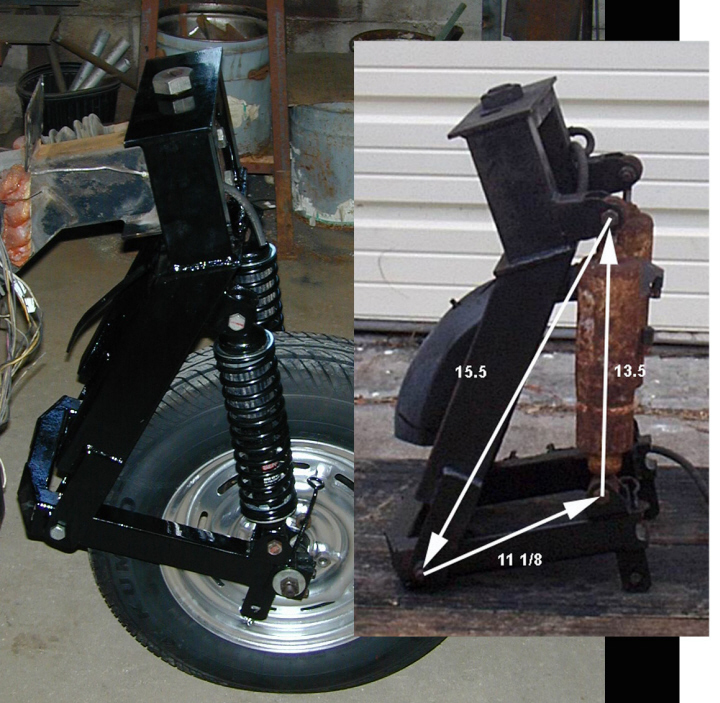 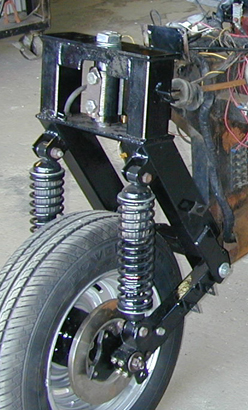 Note: Somewhere between Pulse #142 and #147, OMCC switched from coil-over shocks to air shocks.

If you have coil over shocks you will have to have someone of about your weight sit in the Pulse while you do the same adjustments. Remember, with coil overs you don't have the ability to fine tune the ride height as you go down the road. It will be a compromise.If you ALWAYS ride alone then you can set the ride height as described. If you often have a passenger, you will have to adjust the ride a little higher as a compromise. It's not hard to add air shocks to the rear only. That solves the compromise problem. Think about it. No matter what,it will probably take a couple of tries to find the best heighth. Caution: When adjusting the turnbuckles be sure to leave at least 1 1/2 inches of threaded section inside the turnbuckles!! Too little and they may break! Not good. If you find that too little thread is left in the turnbuckles then you need to adjust the inside turnbuckle that is located under the rear seat to get the additional adjustment you need.

Dave Bauer #167
Dan Marks stated that his Pulse got very unstable at about 100mph. Mine had the same problem. This is due to the shock setup. I replaced my rear shocks with coil over shocks used on street rods and solved this problem. The vehicle is much more stable both at high speeds and on turns. I took mine up to 140 mph with no problems.

Gabriels will not work in place of the Monroe shocks unless you relocate the shock mounts on the Pulse. This would require cutting and welding. The Monroes are shorter in height than the Gabriels Also the Gabriel shock mounting bushing will have to be cut to length to fit the Pulse shock mounts.

Pulse # 199 has air-shocks front and rear. I have an onboard air pump, pressure gage and switching valve to monitor and or adjust front or rear shock pressure while driving.

I have been driving my Pulse for over several months during 2003 and racked up almost three thousand miles driving back and forth to work. I commute twenty-five miles one way. Eighteen miles of that commute is driving at speeds from 70 to 80 miles an hour. After becoming very confident driving this vehicle at highway speeds I have been playing with raising and lowering the air-shock in which rises or lowers the body/out-riggers. I have found the Pulse is best driven with the out-riggers just touching the ground. When making a normal ninety-degree or more turn in a Pulse with air-shocks, the out-rigger will lift six inches or more depending on the speed and pressure in the air-shocks. After completing the turn the body/out-riggers stay high until the load comes back on the shocks and has time to settle. During this time the Pulse will teeter -totter from out-rigger to out-rigger, creating an annoying, unwanted and possibly dangerous situation.

What causes this is the air-shocks (mainly the rears) unloading/extending from the side G loads in the turn. This is also confirmed by watching the air-shock pressure gage drop drastically. Once the air-shocks are unloaded/extended it takes a few seconds for them to settle back to normal ride position. The air-shocks being under pressure are actually helping (pushing) to assist the excessive roll problem. Bob Cervero has Pulse #61 with coil shocks and it does not exhibit this problem. One way I have found to help over come this problem is to lower the air pressure in the shocks. This has the major draw back of increasing the load and friction on the out-rigger tires. My first set of out-rigger tires lasted less than four hundred miles which is another problem in its self.

So how do we fix this over roll problem? Bob and I were discussing the problem and he came up with and idea of limiting the swing-arm travel. With that in mind the ideas starting flying. One idea would be to attach a right-angled rod by the upper shock mount and provide sliding blocks on swing-arm that the rods would travel through. The very ends of the rods would be threaded for adjustment and have rubber bumpers to soften the end limit of the extension. The adjustment would allow you to set the total ride height and control the lift of the out-rigger tire.

Ok now I'm going to start some controversy about the Pulse. My personal finding with owning a Pulse is this vehicle was never designed to drive on two wheels down the highway. The geometry of the production Litestars/Pulses front ends are not set up to do this. There is no way you can get feed back from countering steering like you do from driving a motorcycle. The Pulse uses a gearbox with reduction for steering, which completely eliminates any counter-steering feed back. 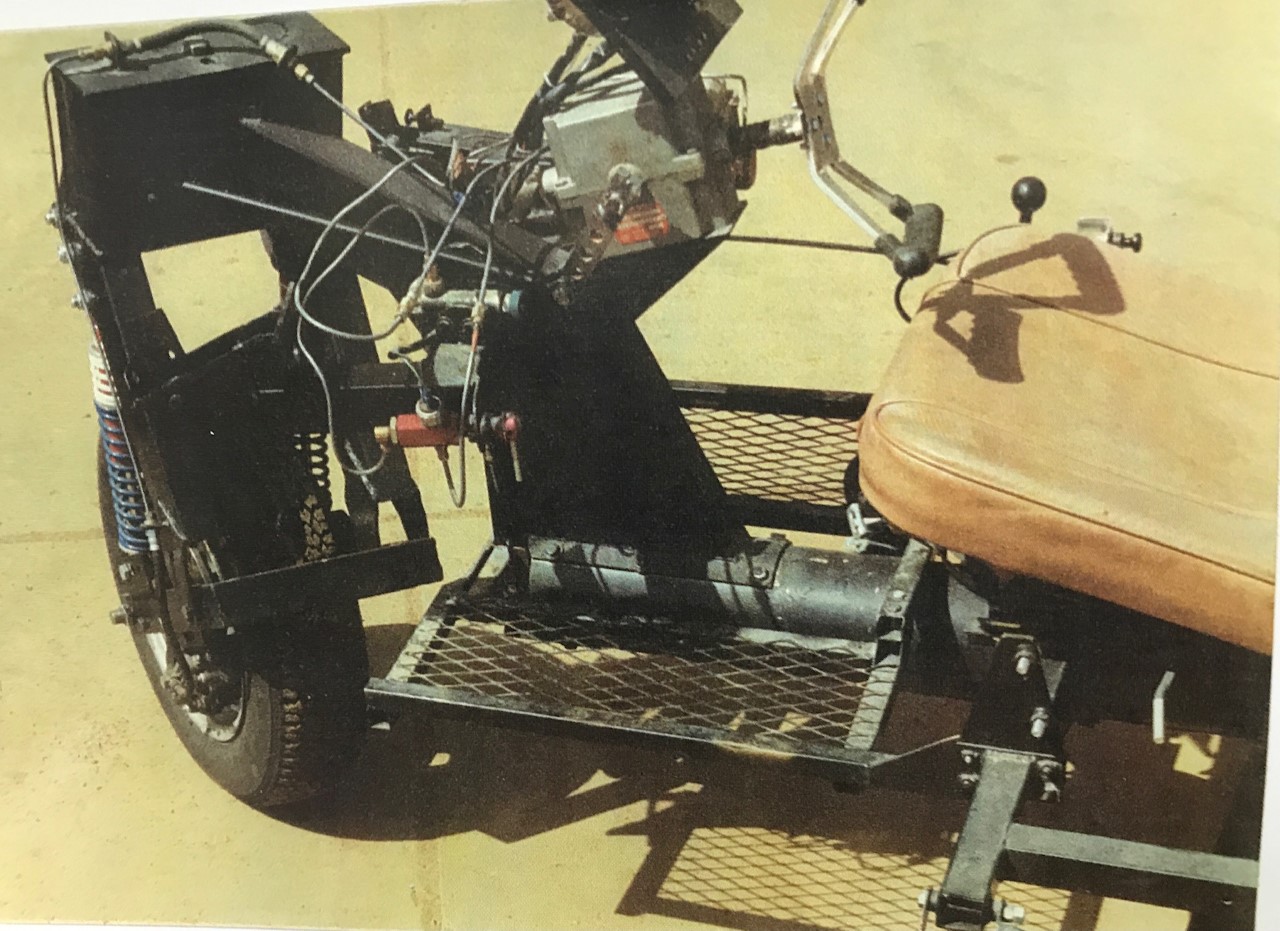 Notice the position of the front shock. Most rake angles
for motorcycles are approximately 30 degrees. The Pulse actually has a negative rake angle.

I have tried many times at highway speeds to do this and found it to be dangerous. If you have ever ridden a motorcycle and left the kickstand down and tried to make a turn you would understand. I have been able to keep the Pulse on two wheels for a short time. It's very hard to do this because of wind conditions, your body weight changing slightly to one side or other cars passing and creating wind turbulence. Riding on two wheels means at sometime the out-rigger tire is going to touch. When this happens at highway speeds things become very dangerous, the teeter-totter from out-rigger to out-rigger can become very rapid and excessive. Over controlling when this happens would result in a disaster at this speed.

Coil-over springs kits and standard automotive shocks would not allow for the major differences in loads (passenger, gas, carried items) but does help in the rebound as the standard coiled shocks installed on some production units. By using my onboard adjustable air-shocks I have found the best shock position to be with as little load as possible on the out-riggers tires. This is hard to judge unless you raise the shock height while driving until you can teeter-totter then just lower the shocks until both out-rigger tires just touch. With the on board air-shock pressure gage this allows you to preset your normal load setting with out having to do this each time. The only time I have found more load on the out-rigger tires helps is when there is a heavy cross-wind driving at highway speeds. Also I have found Pulse handles better with a passenger load driving at highway speeds. One other plus for having air-shocks is when backing up by pushing or using the electric reverse unit. It's much easier to move the Pulse backwards when one out-rigger tire is lifted. This is especially noticed when making even a slight turn in reverse. Using coiled shocks and changing loads does not allow you to adjust the delicate load requirements to minimize the out-rigger tire wear. I have also found that the front air-shocks require only an initial adjustment for an loaded or unloaded passenger load. I run the front wheel height between 10 and 11 inches. This height is measured using a ruler from the ground level to the front body edge of the front wheel cavity, taken at the center of this opening. The rear shocks do the most for load adjustment because of the loaded position of the passenger and storage compartment.

I have never checked the toe-in because there is no adjustment to correct it, but you can control the camber of the out-riggers to help decrease the wear at the center of the tire. The U.S. DOT defines motorcycles as "any vehicle that maintains not more than three wheels in contact with the ground and has a saddle seat for the rider." Is the Litestar/Pulse a motorcycle? I find the Litestar/Pulse design runs mainly on four wheels and sometimes rides on three when you are turning. This is why the out-rigger tire wear is so high they are almost always in contact with the road. I have a demonstration video that was made for marketing the Pulse and you can see that it rides on all fours when going down the highway and lifts a tire in a turn.

I am also in the process of building a high point tire balancer for the eight-inch out-rigger tires. Automotive tire balancers were never designed for this small of a tire and they do a poor job of balancing them. I will post more on this when it is completed.