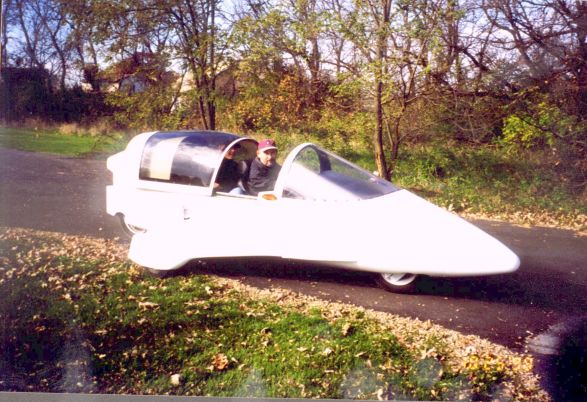 Owned by Tom Caprioli of Wisconsin.

(Could have been built by the California company owned by Henry Coppola and Dan Willis
who may have used Owosso Litestar #9 to make molds for Tom's autocycle.....
or could be Owosso built Litestar #7 or #19.)

I bought my Litestar from Dan Willis who was a partner with Henry Coppolla in LiteStar of San Diego. My Litestar was originally painted red. When Litestar of San Diego dissolved Henry took Litestar #10 and Dan took this one.

I don't know where this Litestar originated. Dan didn't say where they got it from. He did all the modifications to this Litestar including installation of the BMW K100 motorcycle engine, interior radiator, polycarbonite windshield and revised dash.

Dan was the one that claimed that this Litestar appeared in Back To The Future II. The fact the Litestar of San Diego made Litestar prototype(s) intrigues me. I wonder how many they were able to make and sell. Maybe this one was made in San Diego. Maybe it is the one that they disassembled to make the molds for the San Diego Litestars.

The picture that Dan gave me of the Litestar that they built looks alot like a Scranton Litestar but with a higher outrigger shell to accomodate the larger tire.

Tom said that the front part of the frame that goes from the tube forward to hold the steering assembly is not gooseneck like mine but straight angled. I want to look at Bill Senter's two Pulses to see how those were constructed. I asked Luke Chaplin to photo his to see if it is bolted to the tube like Mike Mcmahon's Scranton. My outrigger frames have claw-like stoppers on the bottom of the front hinge that limits the outrigger's downward movement. The rod limits the upward movement and has a spring on the outrigger side of the rod for cushioning the fall to that outrigger.

I think that that was an invention of Dan Willis. Doug Walsh talks about an aluminum tube for the main body of the Scranton frames. I wonder if aluminum would hold up. I guess that was what the sandbag test was all about. I thought aluminum was hard/tricky to weld. Would that be the reason the front steering assembly was bolted to the tube and not welded? 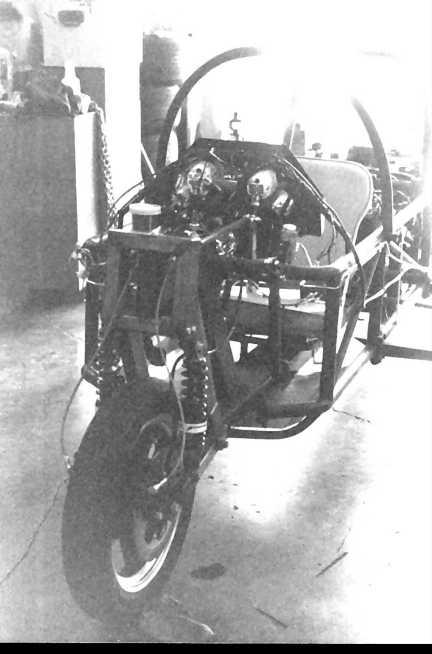 I'm sure that my tube is steel as the front steering assembly is welded to it. Dan Willis also rebuilt the rear part of the frame to accomodate the BMW cycle frame. In the Dealer/Distributor Meeting there was mention of a retrofit for the outriggers that would install the larger wheels. That would have to include the larger wheels and a new fiberglass shell.

Below is a picture of the 'prototype' frame that Henry Coppola and Dan Willis put together. It is in B&W, because the original is overexposed and doesn't show much.

The front assembly is similar to the Pulse, but different in execution. The body frame is constructed of tubular steel and not square steel. The outrigger frames are different. No, this is not my machine. I don't know if they ever made the shell for this prototype.

My vehicle was worked over quite a bit. The front end has had the headlight area glassed over and a pop-up headlight installed in the nose. The windshield is polycarbonate that is screwed down into position. The canopy glass is screwed down and the whole rear frame was reworked to fit the BMW cycle.

The outrigger assembly is different from anything else I've seen. The dash has been replaced and the seats have been replaced. The rearview mirrors are from the BMW cycle. It's been repainted from red to white with what looks like a grey undercoat to cover the red. The outrigger shells are just painted white.

Dan Willis says that it is not the prototype, but he doesn't say what it is, except that it was one of two that his company had. When the company died, Henry took one and he took the other.

Henry's Litestar was the one that they used for demos. I have pics from Dan Willis that show it in several autoshow settings. It is now owned by Dave McCoy and is an electric vehicle. Recessed headlights, BMW side mirrors, black mat runner, black stripe and Litestar on side. 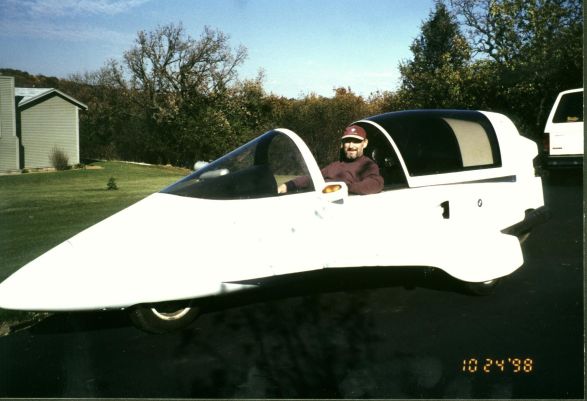 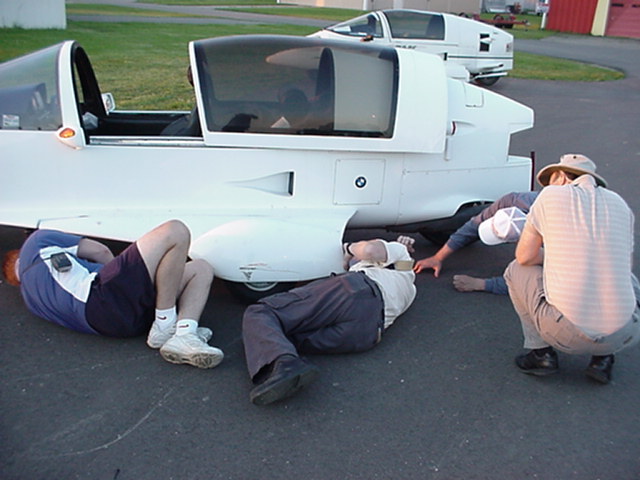 After reading the Tomorrow Corp. Newsletters, I guess my car is either the prototype based on the Owosso Litestar or the actual Owosso Litestar that they dismantled to reveal the poor workmanship and dangerous welds.

Mine does not have fit or finish. All it has is the two interior side panels. The dash is the front part of the Owosso Litestar dash with the center cut out for the BMW cycle instrument cluster. The cover is sheet metal bent to fit over the dash. The front seat is a sports car seat that Dan Willis purchsed and the rear seat looks like it was made to match the front seat. The rear seat fits into the interior rear panel. As you can see it looks like my machine could be the prototype as it is bits and pieces of other things probably including the shell molded from the Owosso Litestar.