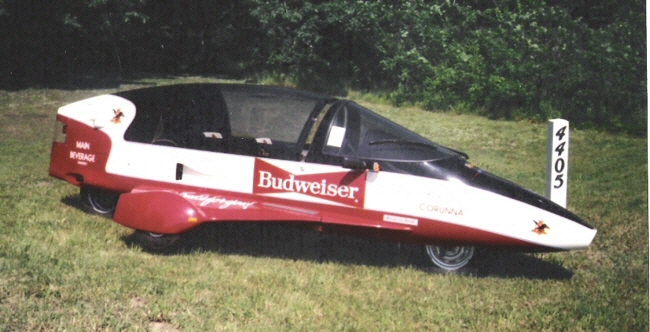 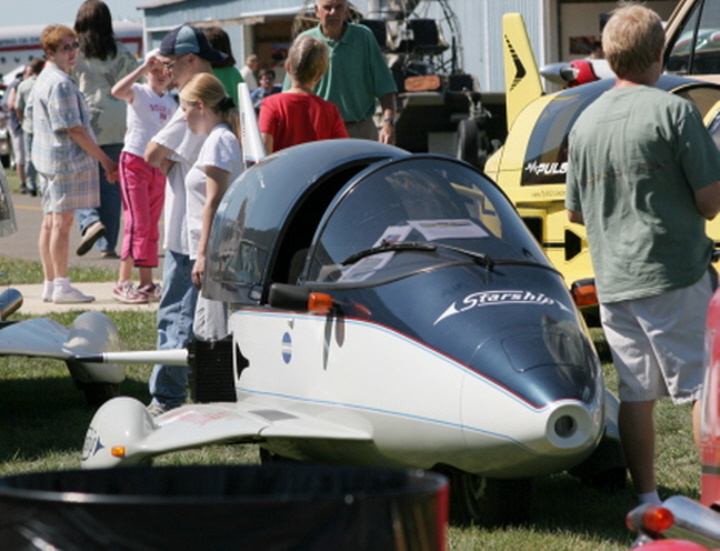 Pulse #100 today is owned by Irving Remocker of Glasgow, Scotland. Irving bought it from Dan & Cindy Acker of Georgia in Oct. of 2013.

Dan Marks of Corunna, Michigan was one of the original investors in the Owosso Motor Car Company and he also worked at OMCC from the start of production as an engineer. This is the special Pulse that he built.

According to Dan, the wind drag on the Pulse vehicle was almost zero, which resulted in its aerodynamic success. However, during testing that he performed, it was found that at higher speeds its perfect shape created a near vacuum which caused the air-cooled engines to overheat.

Dan had attached short pieces of string to the outside of rear body around the 'NACA ducts' and all over the engine itself. He then installed a rear engine cover that was specially made of clear plastic so as to view the reaction of the strings to air speed. Next, he sat facing the rear and had the Pulse driven from moderate to high speeds. He was surprised to find that the strings remained limp at higher speeds, thus his suspicions of vacuum like conditions in the engine compartment, that lead to overheating conditions, were true.

Ed Butcher recalls that the overheating problem was the main concern of the early production units, until the watercooled engines were used.

Pulse #100 was considered a early milestone by the Owosso Motor Car Company (OMCC). This was Dan's personal car and he entered into a lease purchase with OMCC in 1985. A Certificate of Origin was issued November 21, 1985, which matches the VIN number as shown below: 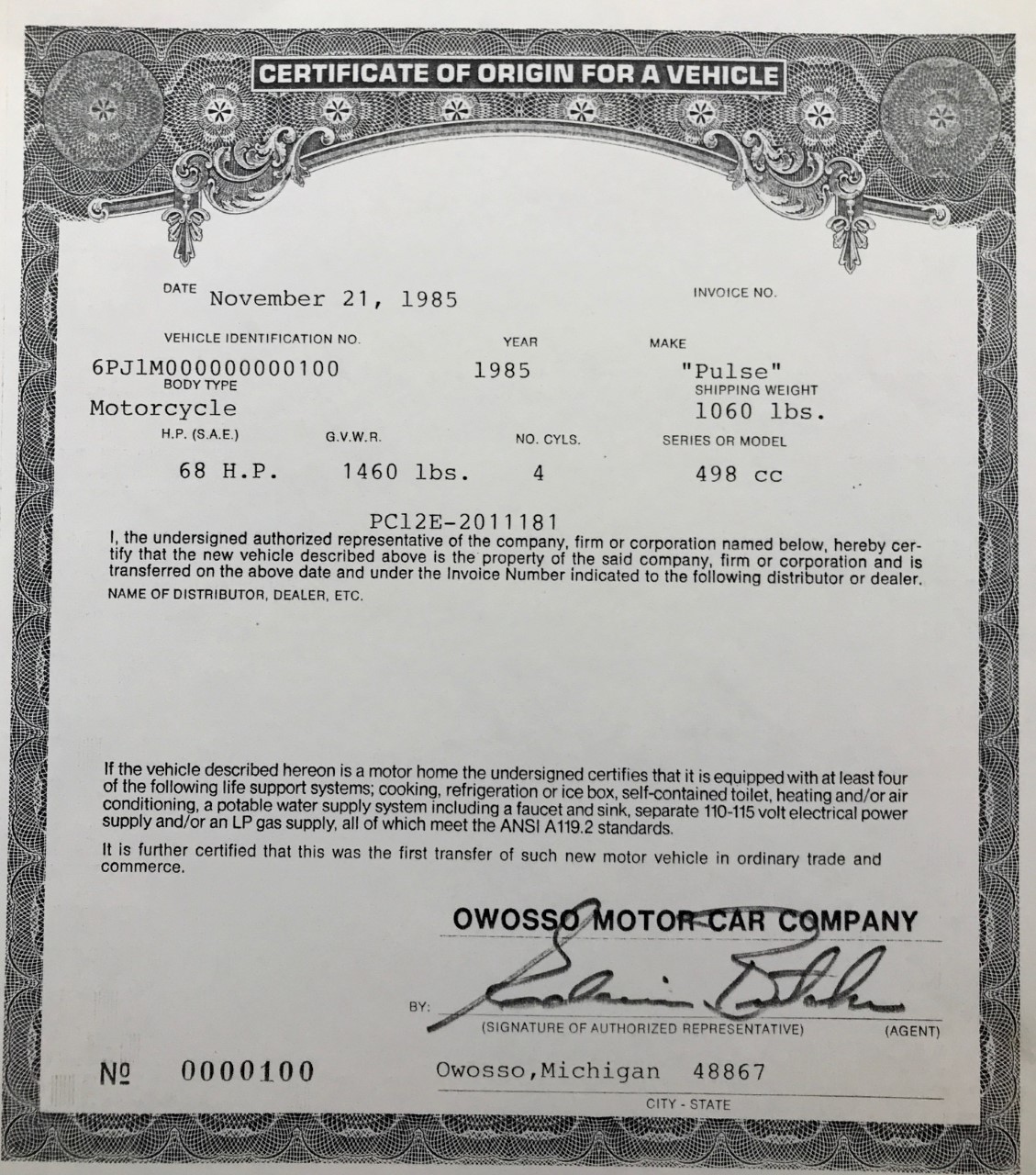 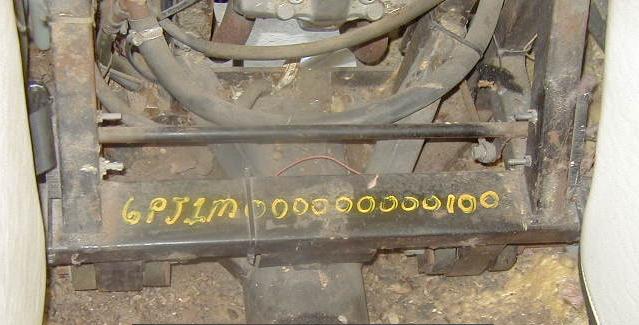 The photo above shows the hand painted VIN number, which is located on the frame below the rear seat. This is VIN number 100. Also notice the mainframe tube. All of the frame parts were assemble at the OMCC plant and were of chrome-moly steel.

It is interesting to note the VIN number, 6PJ1M000000000100, does not contain any of the normal identifying digits that normally provide information on paint color, type of engine, check digit or other vehicle specific information. Dan Marks said that the frame of Pulse 100 was set aside an OMCC allowing him to work on it as a prototype for improvements. He installed the first water cooled engine into the frame.

In testing this new engine, even though it had more power, it continued to run with very warm engine temperatures. The final radiator placement was directly in the airflow and was mounted out onto the outrigger of the left side of the unit. 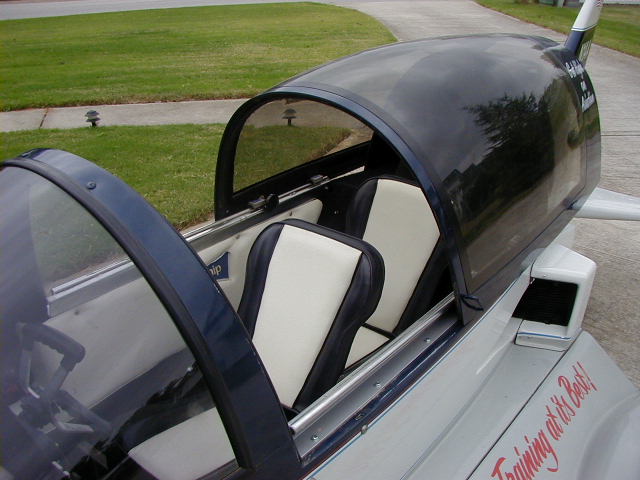 The original radiator came from the 500cc Honda Interceptor that supplied the engine. This radiator was replaced with a radiator and fan from a 750cc Honda Motorcycle, which cured the warm running nature of the engine.

While Dan Marks owned the Pulse, he entered into an agreement with the local Budweiser distributor, the Main Beverage Company of Owosso, who paid for the special Budweiser paint scheme and the custom interior thus converting the unit to a rolling advertisement for Budweiser Beer.

Dan in return would maintain the vehicle and use it in parades and area car shows. He and Gary Bendall took it to a Monster Truck show at the Pontiac Silver Dome. Dan quipped, "I've never seen so many camera flashes....it was amazing."

2 pics of the bud car at show?

Transportation to and from the shows was accomplished by the use of a tilt bed trailer specially built by Dan Marks. The Pulse rolls on, or can be winched on, using a front wheel yolk attached to a winch. The outrigger wheels have their own pad for support. 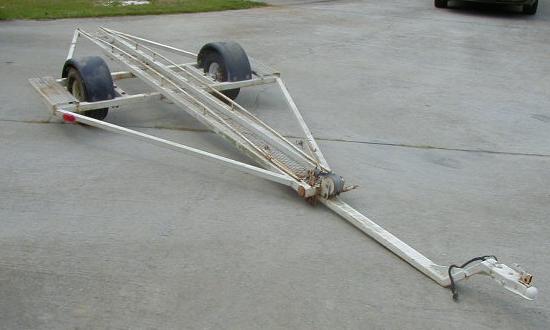 The unit is tied to the trailer via the front wheel yolk and a turnbuckle-type tie down that is clipped to the lower frame in the rear by the engine.

In the agreement that Dan Marks had with OMCC he was entitled to two updates of his unit 100. Since this was also an experimental unit it had some features that were different from the other Pulses produced with close VIN numbers (around 100). 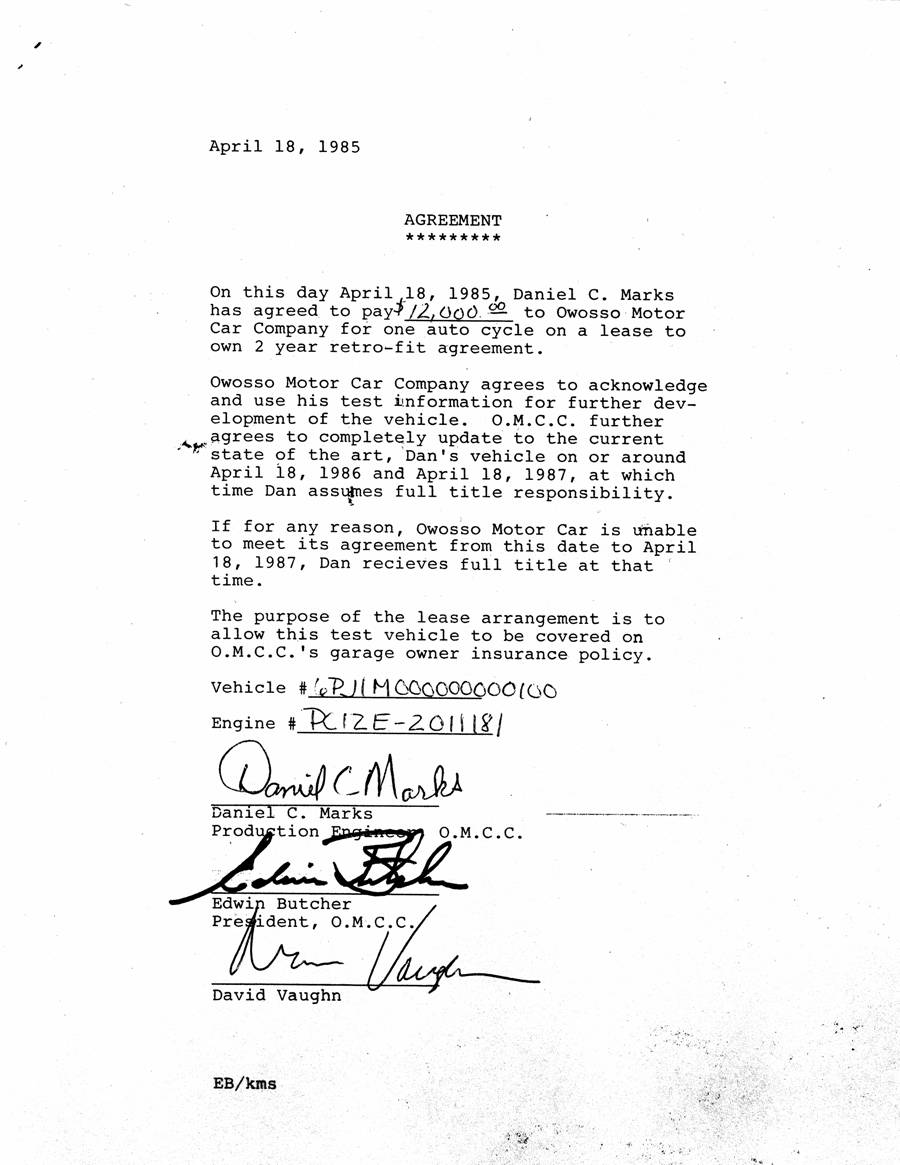 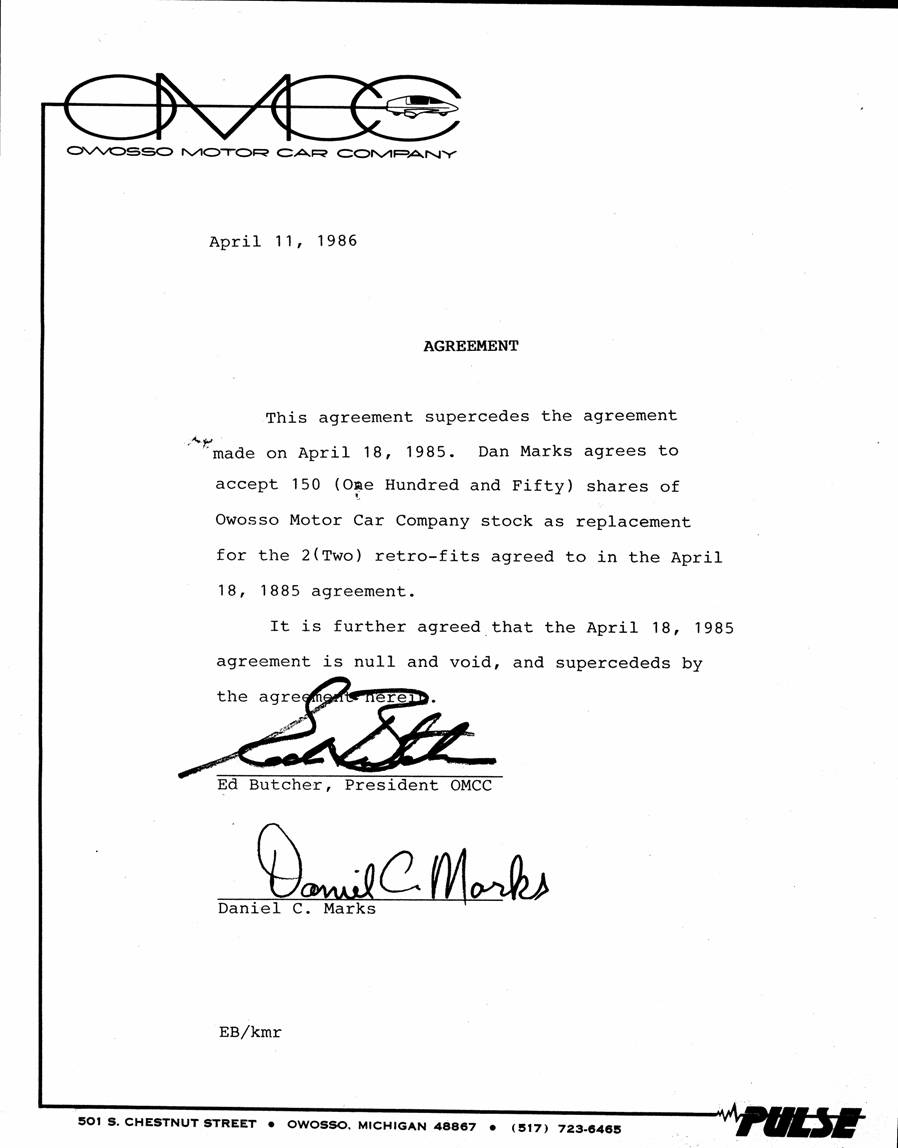 The unit has the retractable 'pop-up' headlight instead of the dual headlights. Another unusual feature that was installed was a nose vent as pictured below: 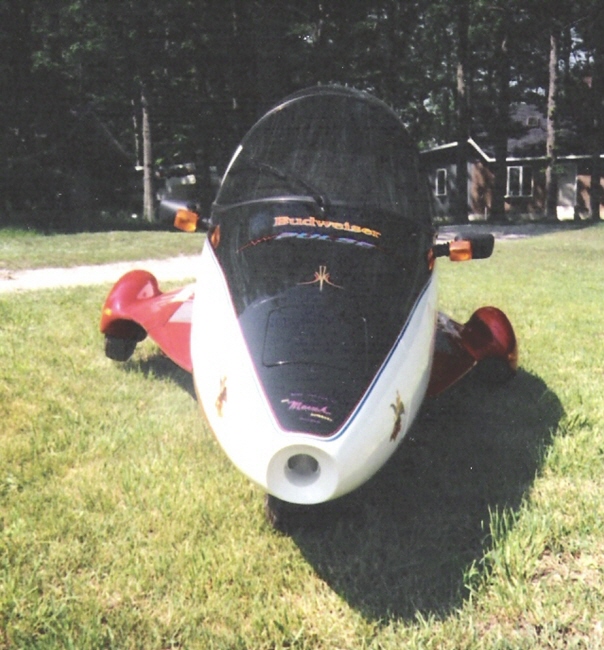 This feature was designed and installed by Dan Marks. The two small holes that can be seen inside of the nose vent are connected to tubing that is vented into the cockpit of the vehicle. The main purpose of these vents was for ventilation when the canopy was closed.

The exact date is not known however in 1986 it appears that Dan Marks took ownership of the unit and was issued the following VIN number.

The reason this was done is not clear however it does accomplish two purposes. Since Pulse 100 was manufactured in 1985 and the VIN on the Certificate of Origin was incomplete, OMCC may have had to reissue a Certificate of Origin in 1986 that had a valid VIN number. By using the same 1986 unit number, the total production count for 1985 would still be correct, as would 1986.

Below photo shows engine and radiator mounted in frame. 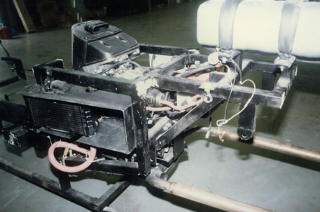 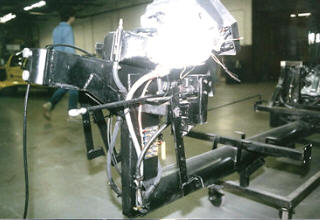 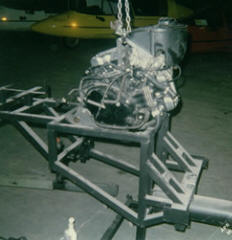 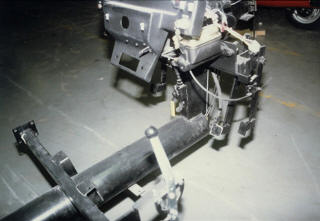 In testing this new engine, even though it had more power, it continued to run with very warm engine temperatures. 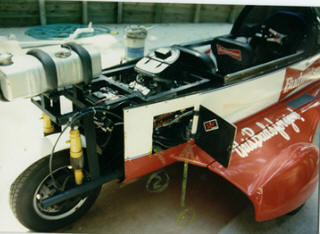 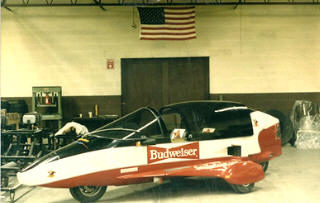 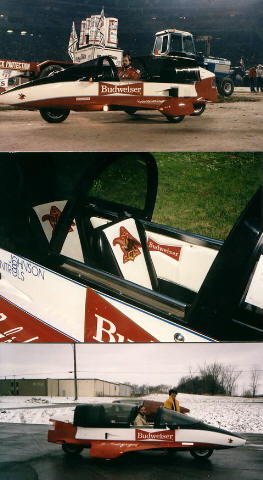 Dan recalls building his own Pulse, serial number 100, above, with a water-cooled Honda engine. Special frame modifications were made for this engine and even more modifications were made for the radiator, which protuded from the rear body panel. The Main Beverage Company of Owosso paid for a special Budweiser paint scheme, including custom interior on Dans Pulse. Dan in return would maintain the vehicle and use it in parades and area car shows. He and Gary Bendall took it to a Monster Truck show at the Pontiac Silver Dome. Dan quipped, "I've never seen so many camera flashes....it was amazing."

Dan recalls running this unit at over 100 mph in fourth gear, ..."it became very light and as I was holding the steering wheel steady it mysteriously jumped from left to right several times. I don't know if it was bouncing from one outrigger wheel to the other, but I quickly slowed it down after realizing that I was about to lose it."

"One of the biggest drawbacks of the Pulse, was the fact that it drew so much attention. You would find yourself barraged with questions for hours everytime you parked it. Stopping for gas could take an hour!" Dan added with a grin.

Sometime in 1986 but before 1992, Dan Marks put Pulse 100 for sale. John S. Morgan in Mississippi purchased it. The only record of the date is a Mississippi Highway Patrol Vehicle Inspection dated 11/1/1991. John was a pilot and the President of Air Academy International, which was a flight training school, based out of Bryan Field in Starkville, Miss. 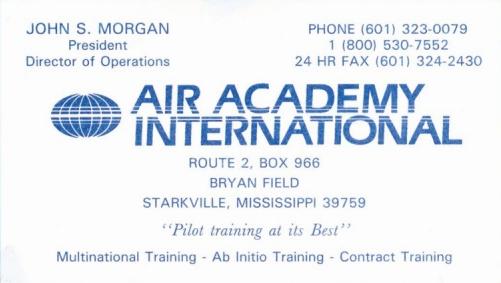 His purpose in purchasing the Pulse was to advertise his flight school. He repainted the unit and added vertical and horizontal stabilizers to the rear of the body to give the impression of an airplane and painted some advertising on the outriggers and body of the unit. The Budweiser logo 'bow tie' was replaced with a similar shaped logo of "Starship" which was a futuristic turbo pusher prop plane that was built during that time frame. The "world" logo from the business card was also placed on the body. 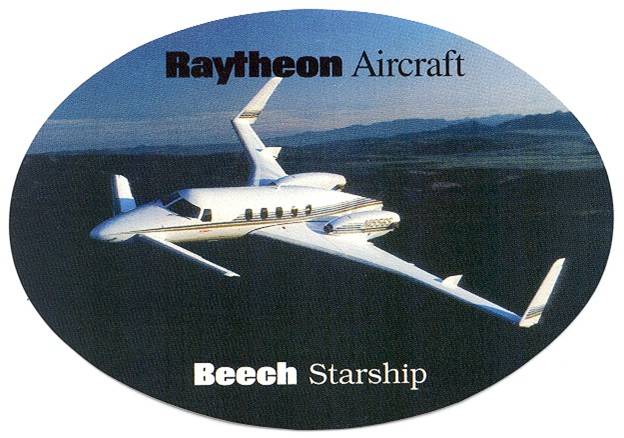 A large sprocket was installed to make it easier to drive in parades and an electrical device was put in the brake line that would hold the hydraulic pressure on the brakes and was controlled by a micro switch on the gearshift lever which was fitted with a throttle control handle from a F16 fighter jet.

In June of 1999, Greg Vaughn of Mississippi purchased the Pulse after it had been stored in a hanger at the Bryan Field airport in Mississippi for a number of years. The Pulse was moved to his farm where it was stored until April of 2004 when Dan Acker of Georgia, purchased it. 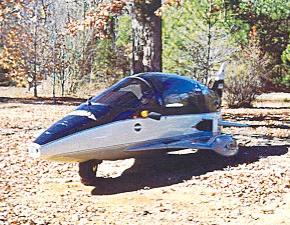 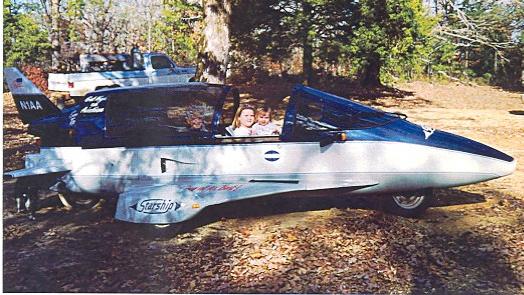 This cycle was sold to Bratton Hercules Petroleum, Owensboro, KY. Upon close comparison the only difference in the VIN numbers is in the 9th digit of the number. Unit 100 has a 2 and unit 168 has a 6. The 9th digit is a check digit.

The exact reason this was done is not clear however it does accomplish two purposes. Since Pulse 100 was manufactured in 1985 and the VIN on the Certificate of Origin was incomplete, OMCC may have had to re-issue a Certificate of Origin in 1986 that had a valid VIN number. By using the same 1986 unit number, the total production count for 1985 would still be correct, as would 1986. 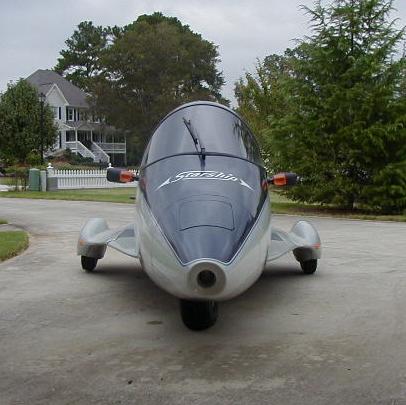 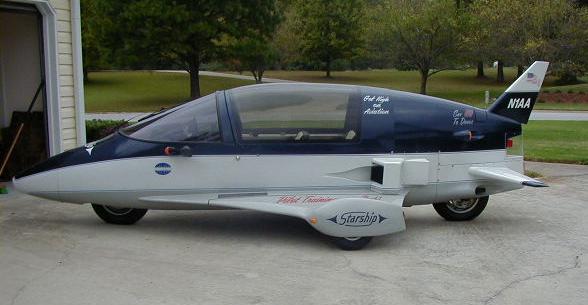 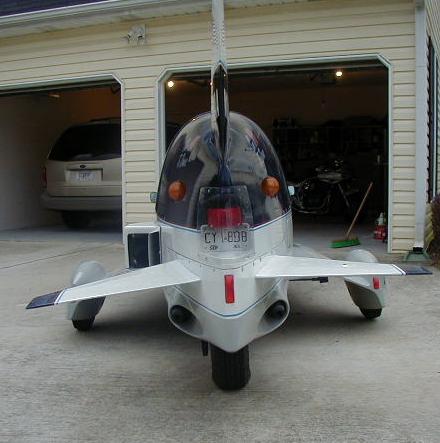