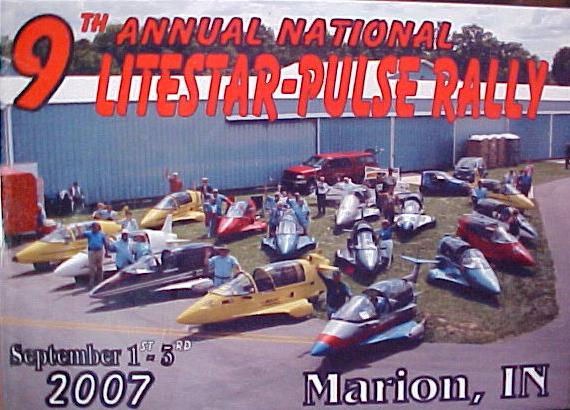 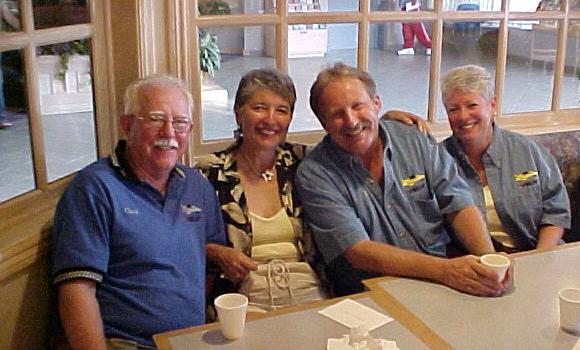 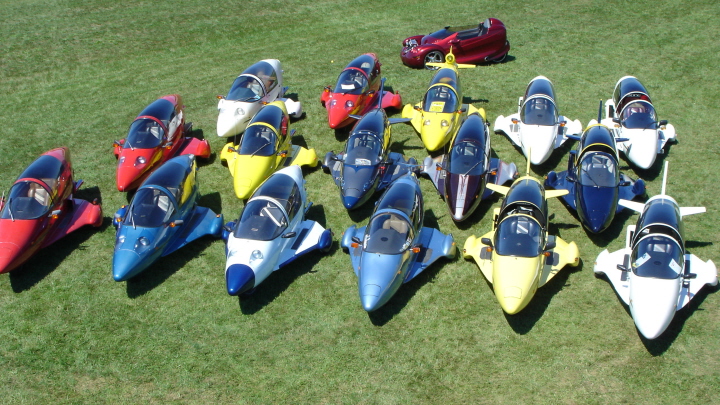 Below --- Ray Johnson with Inge and the film crew 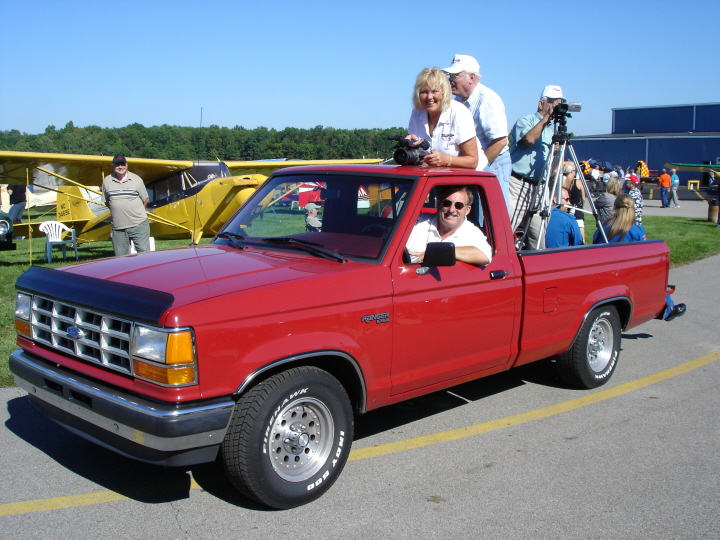 The Fly-In Cruise-In was a huge success with about 3,000 pancake breakfasts being served by the Marion High School Band.

An awesome fly-by of the MiG-17 with afterburner gulping a gallon of fuel a second.

20 Pulse owners and spouses from Coast to Coast attended this years rally. Many promised to return next year and bring their cars.

WOW! 16 Pulses snaking thru the back roads of Indiana is a beautiful site. What a great weekend. The weather was perfect and the sun shined brightly on 16 Pulses and their owners and admirers. 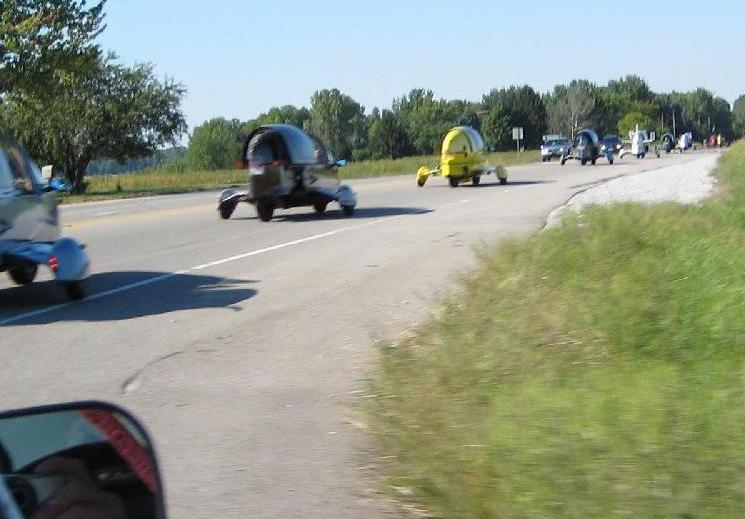 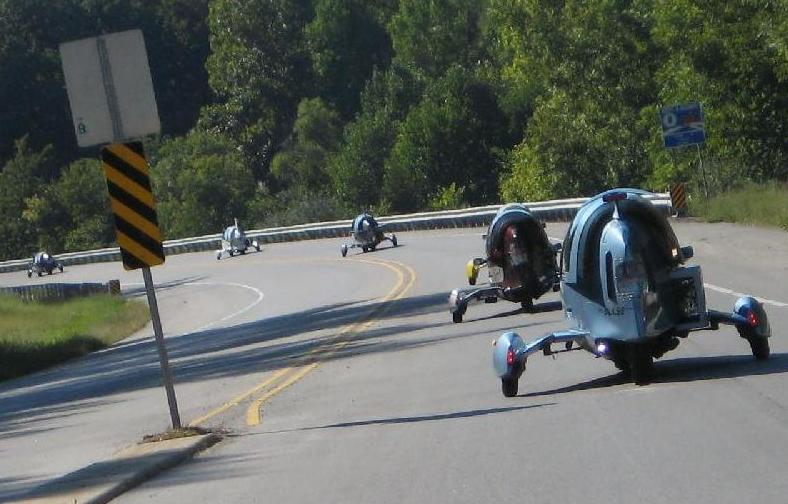 Will Ward's MiG-17 with escort 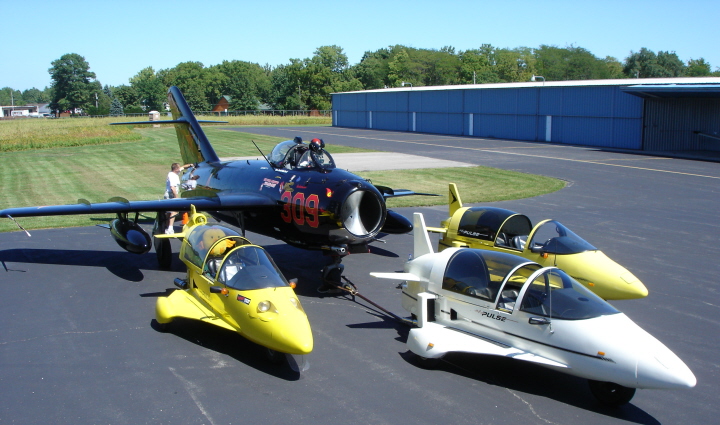 Special thanks to Linda & Chuck Furgason and Janelle & Dave Ohmstede for the fantastic Convention Booklets. 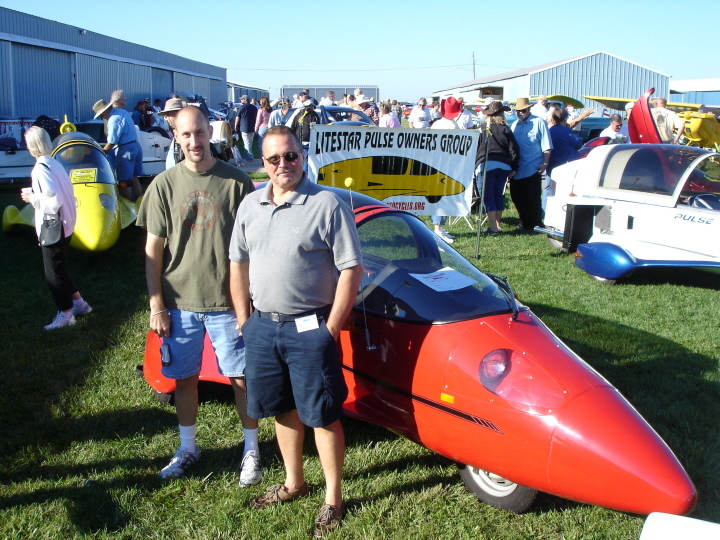 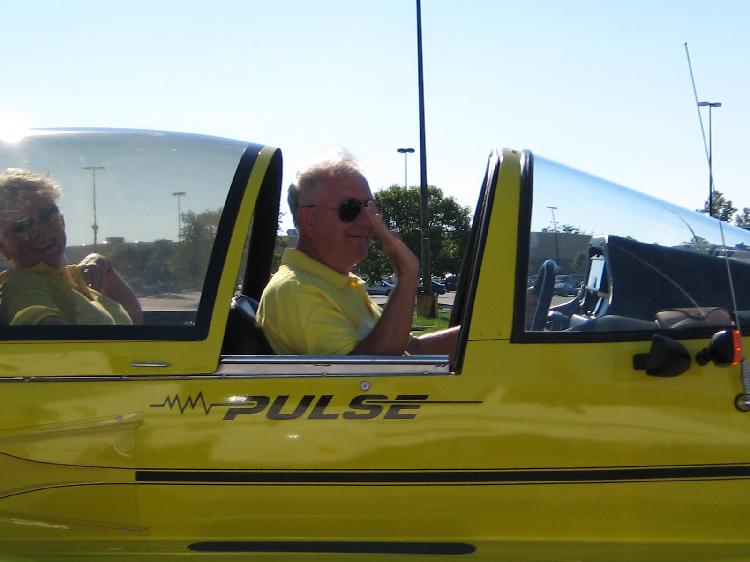 I think we again hooked several on the autocycle design and they are now in ''Search Mode".

Ray & Judy provided a super meal on Sat. afternoon at their hanger.

Jim owns Pulse #304 and plans to bring it next year. 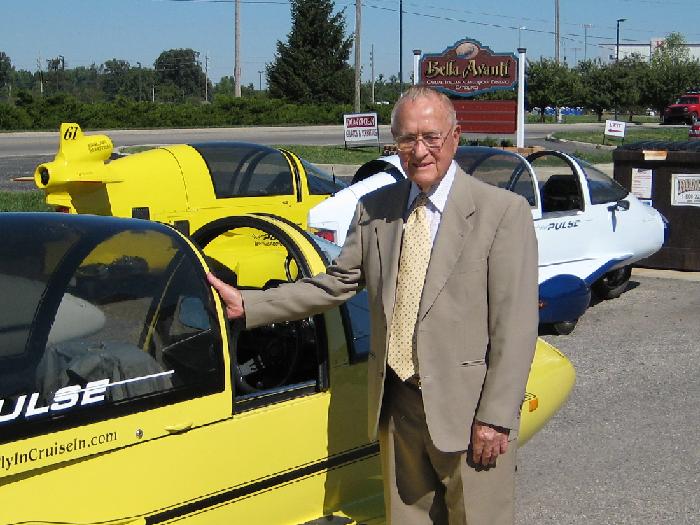 We also visited the AMA world headquarters and museum, located on 1,000 acres near Muncie, Indiana. Remote controlled model aircraft took to the air after we visited the museum.

On Sunday morning, Ray led club members on a beautiful road tour thru the cornfields of Indiana to Craig Heavenridge's restaurant. Fabulous Italian food and tasty ice cream was served.
Below --- Mike Lechlitner of Maryland and his Maize & Blue Pulse #325....University of Michigan 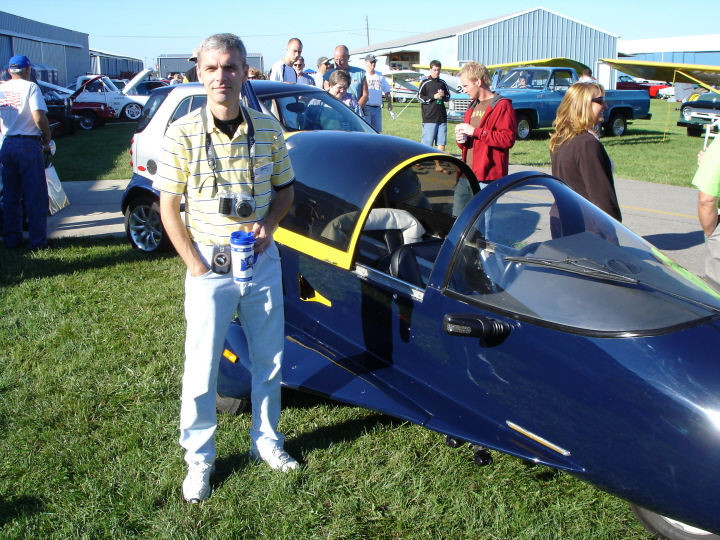 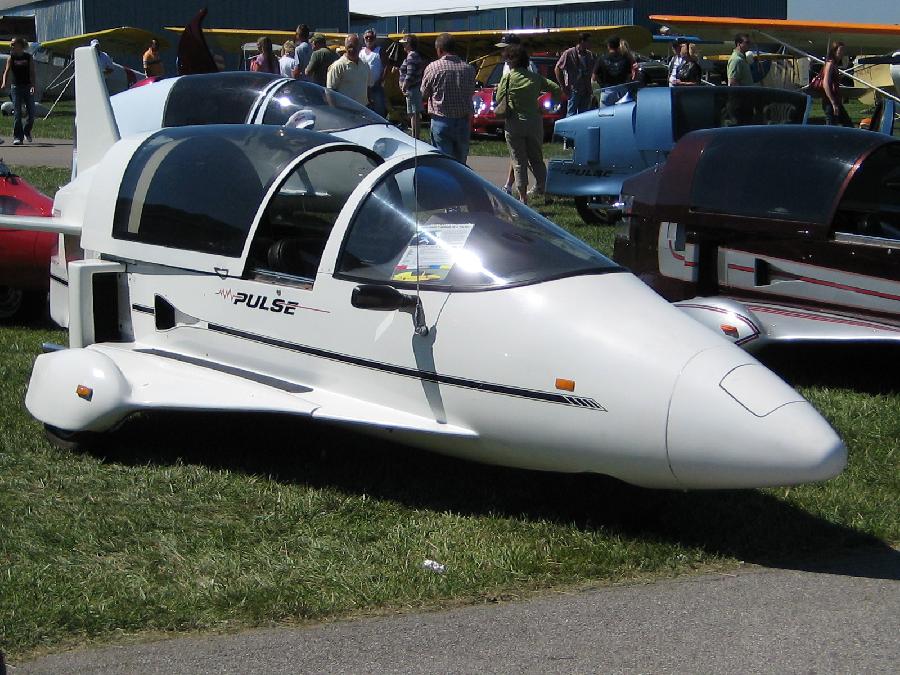 COMMENTS ABOUT THE RALLY:

Thanks Steve, I look forward to finding a Pulse and joining your great group of friends.
Bill Lewis .....Grand Rapids, MI

Thank you for all you do to make the week-end at Marion a success.
Nelson Hack

Ray, Chuck, Steve,
Thanks for a wonderful time again at the FlyIn/CruiseIn!! Everyone said this was the best rally ever!!! Thanks for all the hard work each of you do!!!
Don Willi

The 9th Litestar/Pulse Rally began on a beautiful Labor Day weekend 2007 with owners and interested attendees checking into the Comfort Suites. As we began to trickle in we caught up with friends and learned of their travels across county to arrive in the fine Midwest town of Marion located in the farmland of Indiana. New faces soon became acquainted as introductions were made and we checked out each other's machines. Soon it was time to gather and drive our Pulses in formation through town to the airport for the delicious bar-b-que dinner held as the kick off to the 17th annual FlyIN/CruiseIN.

Arndt Muller generously donates this fine meal along with entertainment for the evening. His hanger is always spotless, the food delicious, the drinks cold and the people friendly. Ray and Judy Johnson our hosts greet everyone and Will Ward the Mig17 pilot is introduced. Will explains that his aircraft was actually built in China and that the Chinese lent them to North Vietnam during that unfortunate war. So perhaps this one actually flew during that war but not on the side of the Americans. He burns approximately one gallon of aviation fuel ($4.50/gal) a minute during regular flight and that when he has the afterburners on the rate of fuel consumption rises to one gallon per second. Will loves to fly and as a pilot for Spirit Airlines he has logged many miles enjoying the skies.

We greet other pilots and auto cycle owners who have arrived in this evening, listen to bluegrass music and watch as the airport comes to life as people gather to begin preparations for the large pancake breakfast to be held in the morning.

Six a.m. seems to come too early as some of our members were talking way into the night sharing all the Pulse ideas and solving problems as information was shared. The number of Pulses has grown overnight and we are a pretty sight driving along the wide road to the FlyIn/CruiseIn before the 7 a.m. start. We position ourselves on a grassy triangle of land next to the hub of activity near the Big Hanger. The aroma of pancakes and sausage assault our senses and cause our minds to drift to breakfast.

The skies begin to fill over this non-towered airport. Hundreds of aircraft including planes, powered parachutes, helicopters and experimental aircraft appear as if by magic matching the number of ground transportation vehicles arriving consisting of cars, trucks, motorcycles and Pulses. Background music is playing filling the air once again with tunes of the 50's and sixties. The Marion band students are busily bussing tables and they along with a myriad of volunteers from all walks of life make this popular fundraiser happen now in its 17th year.

After the delicious breakfast feast we talk to many people interested in our unique form of transportation. Answering the normal questions of whether it's street legal (that's how we got here), is it solar powered and how fast does it go comes with the territory of owning a Pulse. We are always meeting people who want to buy one and especially enjoy meeting new people who own a Pulse. This year it was Jim Amos (#304) who along with his son drove up from Muncie, IN. Jim's Pulse is being repainted even though Jim is in his nineties he & Pulse will be at the Rally in 2008.

After thousands of people have passed by we gather together at Judy & Ray's new hanger for a great barbequed lunch of hamburgers, Brats and hot dogs. Judy and helpers have once again out done themselves with desserts and salads. Who can resist Judy's grape salad or cream pies?

Now the fun begins of gathering the Pulses and Litestar for a group shot.

Dinner, yes even after all that airport food we hoped in our Pulses that evening and gathered along with a few remaining FlyIn/CruiseIn folks at a local restaurant to fuel us for the day ahead.

Sunday dawned to another midwestern blue sky as we gathered in the motel parking lot. Before leaving we all autographed a quilt hand made by Janelle Ohmstede to be send to another one of our members Dave Bauer (#167) who is stationed in Iraq.

We then began caravaning to the Academy of Model Aeronautics (AMA) in Muncie, IN. After a personal tour of the information and model filled museum we drove to a field on site to watch the models fly. What an enjoyable experience.

There were, however, always a couple of tales resulting from the day. Leo Doyle shown below in my side view mirror managed to break a clutch cable. And Ray Johnson's trusty antique Ford truck had a flat in the AMA parking lot.

We ended the day with a delicious dinner at Craig Heavenridge's (#313 & 277) Italian Restaurant in Muncie. Not only were we absolutely stuffed with excellent cooking we ended the meal with home made Italian Ice from his roadside stand.

With much daylight still remaining we pointed our Pulses back to the motel in Marion through the farmland of central Indiana.

Monday came all too soon as we parted company on this Labor Day 2007 all promising to gather again in Marion, IN for the FlyIn/CruiseIn and Litestar Pulse Rally of 2008 (29Aug08 - 1Sept08).