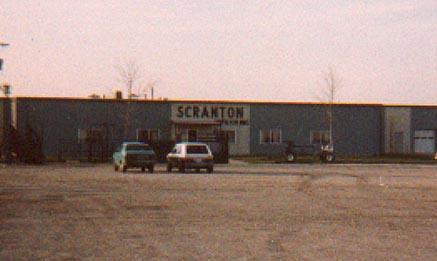 The birthplace of the Litestar, Scranton Mfg. was a manufacturer of horse trailers and farm equipment in Iowa.

According to Doug Walsh, builder of the BD-200, "Scranton had excellent management and hard working people, but still couldn't make the Litestar project work. The design was not finished and changing rapidly as a result of our unofficial testing.

Our BD 200 crew practically lived in the factory for two months trying to design the Litestar on the shop floor. It all could have worked if there was more time and money."

Scranton had purchased 20 complete motorcycles, and they were determined to use as many parts as possible to save money.

The front suspension (forks) were too tall and we needed to change the steering geometry to lighten the steering feel.

On the show car, I solved these problems by relocating the axle midway up the lower fork leg. It worked, but it weakened an already overstressed part. We all agreed that it was a very bad idea to sell cars that way, but there was no alternative short of abandoning the forks for a new design. This was completely unacceptable since there was no hard data to support our concerns."

Scranton Mfg. president was John McLaughlin and Ron Royer was the General Manager.

John was approached by Stan Leitner's Tomorrow Corp. of St. Louis, MO to build about 15 Litestar autocycles during 1983 and 1984.

Actually the Litestars were built by Wellbuilt Inc. a subsidiary of Scranton Mfg. Co. at their Carroll, Iowa plant.

It is believed that these units were called 'Pre-Production' units and were promised to dealers to be used as demonstrators. They were powered by Hondamatic 450cc engines.

The Scranton control number is either painted on the main tube located between the drivers legs or on the frame. The Title of the Litestar usually has the last three numbers such as: VIN #.......100 ---- This is Litestar #002.

However, some VIN numbers are completely different than other VIN numbers of these 15 Litestars, so it can be confusing. The fiberglass bodies were numbered on a label attached to the inside of the body by its' manufacturer, ETM. Enterprises of Grand Ledge, Michigan.

David Vaughn of Owosso, Michigan had the bodies made and shipped to Iowa.

Scranton Manufacturing also made an open single axel trailers, custom made for the Litestar autocycle. Click here to learn more about the trailers.

About 15 to 20 people were involved with the approximate 12 month Litestar project in 1983. Ron said that he was designing and building fixtures to assemble frames at the Carroll, Iowa building.

He recalled the Jim Bede and Stan Leitner were seen at the factory early on.

Scranton Company president was John McLaughlin was a pilot and big on new ideas. Scranton made horse trailers and other farm related equipment basically to supply parts for his large horse ranch operation. Scranton also made snowmobile modifications from skis to mini wheels. Anything that would make money.

On reflection, it was fun working on this project, but the pressures of the endless design changes soon turned it into a very frustrating experience.

At the Scranton and Carroll facilities, we had no direction. We had geared up to produce, but we were at the whims of engineering, I can remember waiting for over a week for "Bede Design" in Chicago, to approve simple changes. A lot of good people wanted to do their jobs, but couldn't get the go ahead to proceed on their own and had to wait for the 'powers that be'.

Soon Bede was less involved hands-on and after the frustrations set in, employees became more skeptical and the luster of working on a big time project became dim.

The Liteastar was thought to boost company profit, which were lagging from agricultural sales. We soon lost a lot of good people and credibility after promising the moon.

I can only recall 13 Litestars coming out of the Carroll, Iowa plant after all the effort. As time went on, I read about the manufacturing of the Litestars and Pulses at Owosso, Michigan and even today continue to bew interested in the legacy of this unique vehicle.