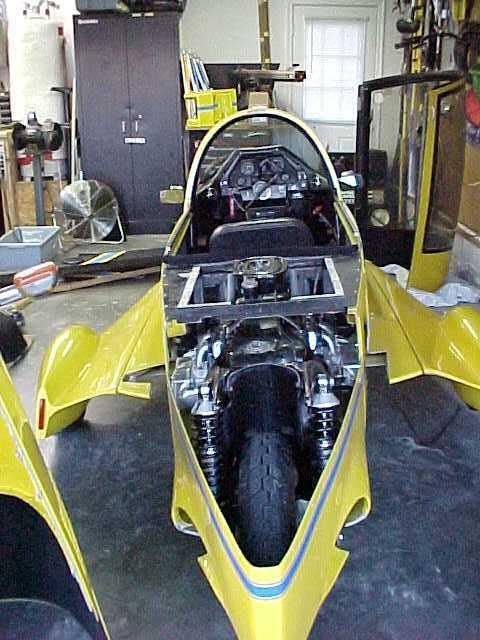 First, it is important to obtain the proper engine manual for your Litestar or Pulse. These manuals will answer alot of questions as to your vehicles engine, electrical, brakes, dash gauges, etc. The vehicles with the air-cooled engines are prone to over-heating and there is not much you can do other than more vents and using synthetic oils.

The only real fix to the overheating problem is to convert to a water cooled engine. Ever wonder why you see an 18 year old Pulse with no more than a few thousand miles on it.

I hope the following tips and links will help to answer many of your questions regarding repair of these interesting machines
.................wishing you all the best......Steve Schmidt

I'm Thinking about Updating my Engine in my Pulse.....
Which Engine should I Use???

How I Cooled the Yamaha 400 Engine....by Don Sucha

There are many possible things that could be wrong, but this is what I would check first.

1) Safety interlocks. Clutch (mounted of the upper clutch pedal area.) Neutral interlock (wire from engine or terminal block bad. there is also a interlock switch mounted at the pivot arm of the clutch)

2) Battery Connections (Ground wire and the B+ side) and or voltage.

3) Starter solenoid and or connections. There are two solenoids on your Pulse. One for the engine and one for reverse.

5) The six fuse Main Fuse Block is another Pulse weak area. The fuse holder is located on the left side of the main steering support. They used the old pinch connectors to hold the fuses in place. These are known to relax and create a bad connection(s). I would remove the fuses one at a time and clean each connector with 600 grit sand paper wrapped around a small tube. Re-bend each connector together to hold the fuse tightly when you reinsert them.

How to Change Front tire

Pulse Logo drawing for making new graphics for your Pulse

In the original Honda-powered Pulse configuration, OMCC simply installed a tee in the thermostat outlet and radiator return lines and ran that water to the front heater core. This resulted in a parallel cooling that neither cooled the engine nor heated the cockpit well. My solution was to run twin radiators for additional cooling AND design a heater supply that took hot water from the upstream side of the thermostat instead of downstream. This traditional automotive design gives me hot water to the heater as soon as the engine starts to warm up, instead of later after the thermostat opens. As a bonus, unlike the original configuration, the system purges air quickly after a coolant flush. 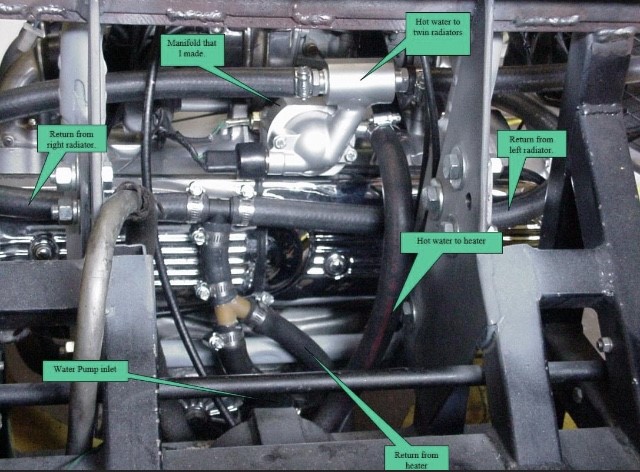 Make your own windshield idea

Tom Donaldson reported on Facebook in 2022 that he obtained the replacement rubber spacers for the outriggers from Izzy_USA.com .

Some units have a nose cone and later models do not.

The solution is to remove the relay and clean all of the contacts. It would be even better if you could find a new relay. One other drawback to this problem is that as the relay begins to burn out, your low beam performance begins to suffer. So, not only do you have a headlight that won't drop, but it is also dim.

Owners with the Pop-Up headlight have the Pontiac Fiero curse. These headlight mechanisms came from Fieros and are well known to have problems. If yours does not work there are several possibilities.

2. There is a relay in the assembly next to the actuation motor that may have failed. This keeps the motor from getting the voltage it needs to operate.

3. The actuation motor itself may have failed.

If the problem is either 2 or 3, you are in bad shape because the motor cannot be operated with the light down. If you look closely into the top, rear portion of the light, you can see the knob on the top of the actuation motor. If you could manually operate this, you could get the light to pop up. I doubt that you could build a tool to do that manually. Try this solution.........

This is what provides some of the drive friction for the clutch, if the shear is unsufficient (too slippery) you wont be able to take off! The clutch will not grab sufficiently and you could burn up your clutch, BTW I upgraded my clutch with a SIMPSON HD racing clutch that was made for using synthetic oils.

Just make sure you run a motorcycle synthetic they are designed for wet clutch systems. I have choosen to try the Amsoil 20/50 motorcycle oil in my 400cc Yamaha after I have completed testing the standard oil.

So far, test with my oil cooling system worked excellent. It was in the mid 80's and I never turned the cooling fan on even running in heavy traffic. The highest the oil temperature ever peaked was 250 degrees and the engine was still running great. The typical oil temparature was around 210 to 230 degrees. Cool down from 250 to typical took about 5 minutes at 45mph.

If I had the same setup as in your Pulse I would use the AMSOIL SAE 10W-40 HIGH PERFORMANCE SYNTHETIC MOTORCYCLE ENGINE OIL or a equivalent synthetic motorcycle oil. Using an automobile synthetic could create clutch slippage problems. Using the synthetic would help lower the engine temperature (30 to 50 degrees) and help reduce engine wear. But just remember when your low on oil do not mix standard oils with the synthetic oil.

Bob Cervero.......
A few years ago, I bought a very nice bright LED electronic speedometer from JC Whitney. I had it in my truck for a long time. It used 4 magnets wired to the driveshaft and a magnetic sensor. It was calibrated by following another car at a known speed and adjusting a knob on the back. Maybe they still offer it. The problem would be finding a place to mount the magnets on a pulse.

I found a repair manual for the 400cc Yamaha engine in my Pulse #61. The manual is for a 1976-1981 Yamaha motorcycle. It looks like the speedometer gear located down on the front wheel of my Pulse is the same one that came on a 1976-1981 Yamaha XS360 and XS400 motorcycle. This suggests you may get a replacement from a Yamaha dealer or motorcycle salvage yard. You probably will have to use the worm gear from your Litestar/Pulse to maintain the proper speed ratio. It is very easy to change. 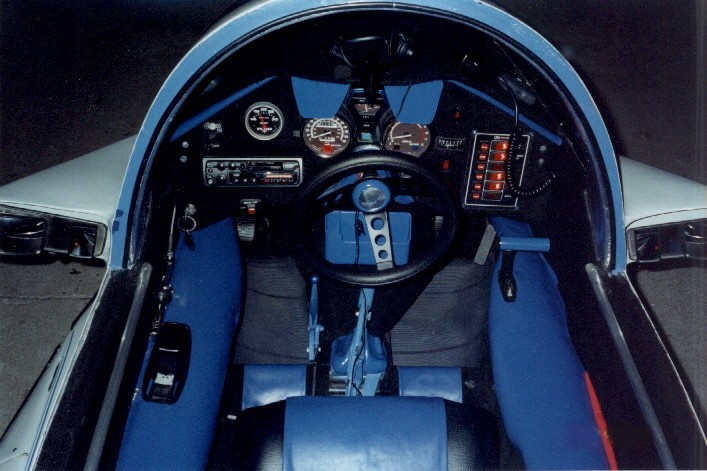 Michael Boyson.......
I used a small LED out of an old computer I took apart. I used electrical shrink wrap to attach the LED to a flexible tube and aimed it at the speedo. It works great. The nice thing about the bicycle speedo is that it can be calibrated for any size tire.

Steve Cole.......
I have pulse 195, the keys were lost by the previous owner, well I found the exact replacement for the ignition switch, down to the knurled nut on the dash, at "Wal-Mart". The part number is UN12140. It is called Universal Ignition Switch. Manufacturer NIEHOFF. Distributer is BWD Automotive, I believe to be Borge-Warner. 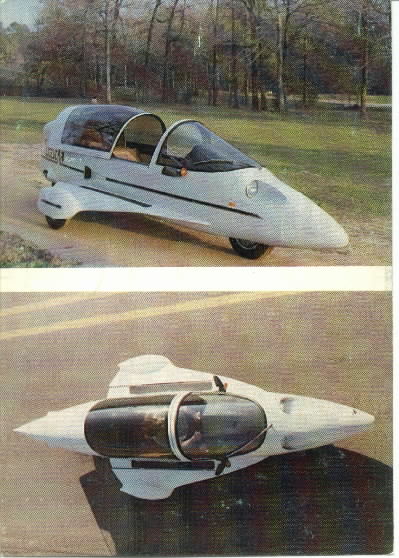 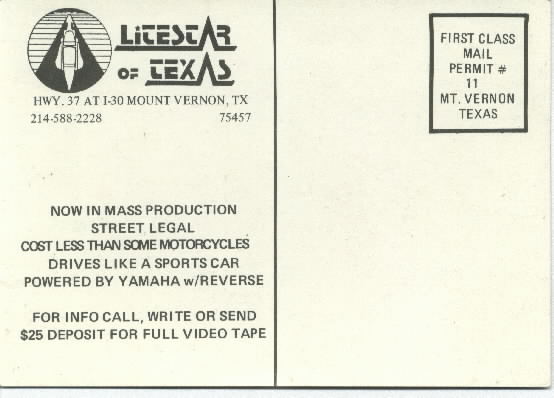 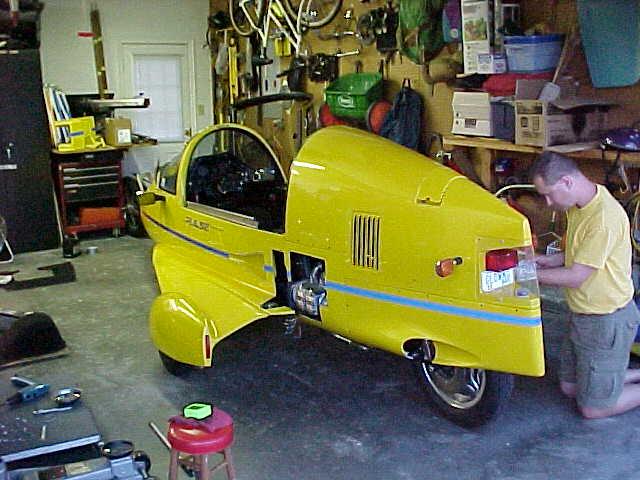 Randy Pinkham Under each outrigger wing is a PVC pipe jutting out for fresh air intake, mine has 4 of them. 2 up front and 2 more towards the rear.

Dave Bauer #167...
One solution to small cc engines is to change the gear ratio. The original chain driven Pulses had rear gears with around 36 teeth. Changing to a rear ratio of about 48 teeth will allow you to use that upper end power at a lower speed and help you start off the line and up hills. Chain gear plates are readily available for under $50. You just have to have them machined to match your lug nut holes. You will lose top end speed when you do this, but you should still be able to hit 100. The trade-off is worth it.

These vehicles run on Regular gas....Check engine manual for exact type to be used.

I have seen claims from 80 to 100 MPG with the 400 Powerplant. I have the 1100 Goldwing and expect to get around 45MPG (on an average). As with any vehicle, it really depends on your driving habits, driving conditions (local or highway), and how well your motor is tuned.

The best solution for a fuel tank is to have a local welding shop or fabrication shop to construct you an aluminum water tank. Most shops will not make fuel tanks and if they do it will cost you and arm and a leg. The shops are liable for the fuel tank(s)and if you request a water tank and fill it with fuel it's your problem. Just make sure the tank is pressure tested to the same standards as a water tank. You may want to add baffle to the inside of the tank. My first custom aluminum 3.5-gallon fuel tank for the Pulse cost me $85.00. Since then I have installed a 10-gallon fuel tank that cost $125. Don't even think of putting a plastic fuel tank in your Pulse.

I am working on pulse #218 and what Bob described is exactly what happened to me when I chased Chuck and Linda's Goldwing powered Pulses up to the big auction after the 2002 Pulse Convention. Unfortunately, my Pulse would no longer make enough power to drive home! Sadly, I had to load it on a trailer to get home. I found out (as Don suggested) that one of the primary ignition coils in the engine had gone bad. I got a replacement set from a junkyard in Colorado (the coils are no longer available from Yamaha) and was back in bussiness. The Pulse ran fine for about a year.

In the mean time I enjoyed taking the Pulse 1200 miles (round trip) to Oshkosh, WI for the EAA Annual Convention. Listening to the truckers on the CB and talking to people at the gas stations was a lot of fun, but the average 45 min gas stop (answering questions) every 100 miles made the trip 16 hours one way. I should have replaced the tires before going... Changing a flat front tire beside the interstate is no fun! The tread pattern on the new tire made the pulse pull to the left baddly! My arms were really cramped after the last 200 miles. The 2003 Pulse convention was three weeks away and I rushed to find new tires. I finally had the Pulse ready to go and just installed the new tires at Midnight before the convention... I lowered the Jack and the Front tire went flat! ARGH!!! It leaked around the rim, I had it fixed Monday, but missed the convention...

As I said earlier the Pulse ran fine for about a year... October, hot day in stop and go traffic.... Pulse started to run bad.... Switched on all the fans and babbied it back to the garage. Tried driving a week later on a nice evening 70 deg. Ran great for about 20 miles. It started running bad, losing power, I turned on the fans. It ran a little better, but it popped and cracked and carried on in the mid rpm bands. It would crackle but run at high RPM, but if I slowed down; I was luckly to keep it running. I checked the primary coils when I got back and sure enough, one of them checks bad again.

I thought about replacing the coils again, but this is not a permanent solution.

This is a personal website and is not affiliated
with the designer, manufacturer or any company officials/employees.